WELCOME RACERS, TO THE MOST DANGEROUS RACE IN THE GALAXY! 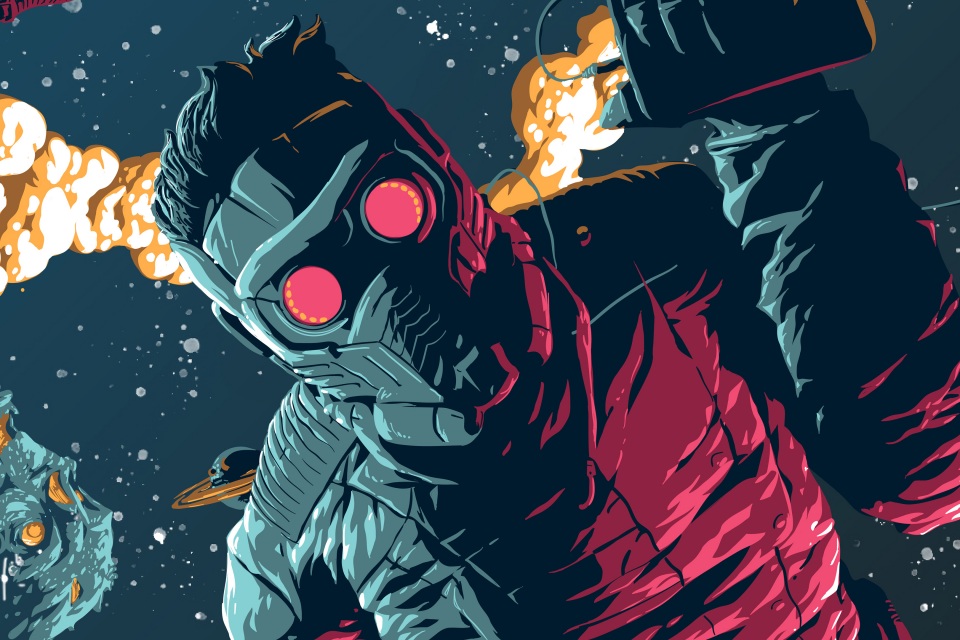 Star-Lord is ready to rock and rumble in the most dangerous race in the galaxy, and he's bringing a lot of racers. Thanks to a few support cards and Star-Lord's ability, he can go 7 wide with allies for some particularly powerful turns with Strength In Numbers.

By now, many of you have heard of the impressive ability Star-Lord has to leverage building up a lot of allies, hitting the boost button so everyone can go out in a Blaze of Glory, but Quill can just duck into alter-ego to save everyone from certain death. But there is so much more to it than that. In this write-up, I'll explain the card choices, strategy, and then close with some important things to keep in mind when piloting this deck.

What is important here is that all of the allies can be played for 2-3 cards from hand, so you can get your racers out as quickly as possible without having to pitch many as resources. There are a few 3-4 cost, which would normally slow down other heroes, but thanks to "What could go wrong?" Quill can play them with ease. Also, Nova Prime unfortunately doesn't have the right license to race, but he's a great member of the pit crew or as a stand-in if you don't have enough racers yet. He has a nice played from hand ability, so he's definitely worth playing before you can go 7 wide. One more important thing to note is Stinger cannot be played without the Avengers trait on your identity, so we've included Make the Call and Quinjet (you can only bring Stinger onto the board with Make the Call, Quinjet, or if a fellow player gives Star-Lord Honorary Avenger).

Getting your roster to 7. You start with 3 allies +1 Avengers Tower +1 Knowhere +1 The Triskelion +1 Stinger. It is important that every ally has the Avengers trait for the Tower and Guardians trait for Knowhere, so we bring an entire roster of avengers, and Star-Lord does the rest with his hero ability.

So what is the benefit of doing this? Well, you have several tools to ensure you have an exciting race: Avengers Assemble!, Blaze of Glory, Daring Escape, Moxie, Sliding Shot, and especially Strength In Numbers.

The combo isn't as simple as Blaze of Glory, alter-ego: win. There's a bit more nuance depending on the current standings. Let's look at a few of them.

When starting in hero form, you can start as above: play Blaze of Glory, go down so your allies won't have to, ???, and profit!

Alternatively, you can start with Strength In Numbers, then play Blaze of Glory, and you'll have a few other options before ducking into alter-ego. Attack or thwart with Star-Lord, then play Daring Escape to ready him and do it again to get a lot of value from his increased stats. Those extra encounter cards also make Sliding Shot more powerful, easily dealing 13 damage each if you use Star-Lord's ability and play all 3 Daring Escapes. Definitely do not sleep on these! Additionally, you can stabilize the board state with Gutsy Move, which will be able to clear an enormous amount of threat along with your hero's and allies' improved THW stats.

One more option you have is with Avengers Assemble!. It will ready all of your allies and give them higher stats. If you play it after Strength In Numbers, you can give them all a chance to activate on that turn, especially with the improved stats from Blaze of Glory. Another option you have is playing Strength In Numbers again to really punch through the villain with Sliding Shot so you don't lose your allies.

You definitely don't want to activate your allies too many times, so it's perfectly fine to leave them all at 1 HP and just start drawing cards. You can play Avengers Assemble! to allow your allies to activate twice, but don't do this if too many of your allies would be defeated unless the villain would be defeated that turn. Team Training is here to support your allies, or alternatively, you can mix and match, sending some racers to thwart/attack again and saving some in reserve to draw more with Strength in Numbers.

With any extra resources, don't forget about your Element Guns.

When you start a turn in Alter-Ego, Blaze of Glory is not going to be a great option unless it would help you close out the race, so an alternative has been included: Moxie. With Moxie, you can give Star-Lord a little more oomph when he activates this turn along with Daring Escape and give him a little more stability for the villain phase. Additionally, starting in alter-ego is a wonderful position for the following combo:

With the above and a full board state, you'll draw through an extra 17 cards, which likely means you can Blaze of the Glory on the following turn before flipping back down. Additionally, you can keep Star-Lord alive with Jet Boots, draw even more cards with your helmet, can make the board state a bit more stable with a powerful Gutsy Move.

The highest priority on your first time through is playing Avengers Tower and Knowhere so you can have as many allies as possible. These will increase your ally limit and also help your setup time by reducing the cost of your allies or drawing a card when you play them, respectively. The next in the priority is playing as many allies as you can. If you have to spend some as resources, thankfully Make the Call is there to assist you. Play Strength In Numbers as often as you can (even with only one ally) to reduce your setup time. Once you have a decent board state, you can start focusing on your combo turns, so try to set this up as quickly as possible. Then: combo, combo, combo!

Rules and Regulations: Things to Consider

Remember to play Stinger with Make the Call or Quinjet. Star-Lord cannot play her from his hand. If you happen to draw both at the same time, you can use Stinger as a resource, then play Make the Call afterwards.

Knowhere will help your setup time as well, but remember that any allies brought into play with Make the Call, Quinjet, or Rapid Response will not trigger the card draw. However, Star-Lord's ability will allow you to trigger Knowhere, since his ability is constant (it's always 'on'), and Knowhere only checks 'after playing' (which includes placing the card in play, paying its cost, and resolving all of its enter play/play effects).

Moxie can only be played when you chance from Alter-Ego to Hero form, but it's a cheap way to keep the pressure on the villain, because you won't want to Blaze of Glory on a turn you end in Hero.

Daring Escape isn't a great value on its own. An encounter card for a hero ready isn't super great honestly, but with Moxie and Blaze of Glory, your hero activations will be stronger and definitely be worth it. Additionally, it helps improve the power of Sliding Shot, Gutsy Move, Jet Boots, and Star-Lords's Helmet.

Don't forget your Element Guns! Any extra resources in your hand you didn't need should be spent for 3 extra damage, as long as you don't hamper your setup.

Don't be afraid to lose allies to keep yourself alive. You have Make the Call and Quinjet, or Avengers Tower and Knowhere to replenish your roster. You can also include Rapid Response if you want some extra security.

The final thing to consider is the extra encounter cards you get every turn. These can actually be quite brutal and put you in a tough position, so don't start going full throttle if you don't think you can deal with the consequences yet. If you want some more survivability, you can go for Endurance and/or Down Time. Additionally, you can use Booster Boots (and remember that you can use 3 copies at a time). Remember that Bad Boy can help you out in a pinch as well.

Just going 7 wide, Blaze of Glory and swapping to Alter-Ego can get a bit boring after a while. Thankfully, there are quite a few more options available. It's an adrenaline-fueled rampage, so I hope you enjoy it.

Special thanks to Remedy of Alter-Egos and BananaCrapshoot of The Side Scheme for their help in making this deck.