Response: After your turn begins, place 1 time counter on Quinjet.

Action: Put an Avenger ally from your hand into play with printed cost equal to or less than the number of time counters on Quinjet. Then, discard Quinjet. 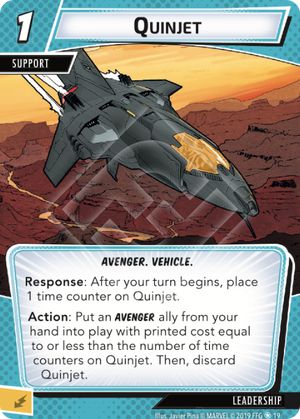 I'm meh on this card. ATM, there are 4 characters who I think the card is worth it for; Falcon, Hawkeye, Hellcat, Spider-Woman. The other avengers allies are either Aggro set so they cannot be affected by Quinjet, or they're 2 cost. For a two cost card, Quinjet just doesn't make sense. The quinjet itself costs 1, so in the majority of situations you'll need it and another card in your hand to pay for it. Then wait two turns to build up enough counters to buy Squirrel Girl or Wonderman. OR, you could just take the card you used to pay for quinjet, and quinjet itself and just buy Squirrel Girl or Wonderman without waiting the two turns. That said, quinjet does act as a quasi resource bank (limited to only buying avengers allies), so if you have one waiting, it can be easier to draw into the ally you needed and Avengers Assemble! and pay for both on the same turn. This feels really niche to me though. I have a hard time justifying the slot outside of a deck focused on using Avengers Assemble!.

Kingbarbarossa · 40
If you hit a two drop with it, you basically traded the cost of the quinjet one turn for less hand pressure on a future turn. It makes more sense in an environment with a lot of Allies. — Myriad · 1 12/31/19
Kingbarbarossa's assessment mirror's mine. I like Quinjet, and think it will see more possible play as additional avenger allies are released that cost more then 3 resources to play. I think it's "ok" at the moment, simply because options are fairly limited in the game. — RolandWright · 1738 1/9/20
I'll add my own review when I get around to building this deck, but I'm thinking that Quinjet has more application, now. I can see Hulk making use of this to get Giant Man, Goliath and Adam Warlock out, as well as Falcon and Hawkeye, which you've already mentioned. Combo'ed with Save the Day, these expensive heroes that Hulk would normally have trouble playing additionally would help his Thwarting deficiencies. — RabidHobbit · 8 12/6/21
Edit: Oops, Adam Warlock isn't an Avenger, so this won't work on that one. Hulk would have to play him the old-fashioned way. — RabidHobbit · 8 12/6/21
I honestly like this card quite a bit. You're spending two cards now to get a 2-? cost ally for free later. The overall economy of this isn't crazy, but the future tempo of it can be - if you can squeeze this into a turn when you have the resource to spare, you'll get a huge boost later on when your free ally comes into play. — Blackhaven · 2 7/17/22
I found value in this card using it with my Hulk deck as a way to help get more allies in and not have to spend turns using my already limited hand to try to get them in. You can pay 2 then in the mean time attack with hulk and friends, then when say someone like Iron Man shows up in your hand and you've built 4 counters, you can get him out there to help thwart a scheme or kill a minion. You have a reinforced suit/inspired in your hand too? More free plays. Very fun and keeps the flow of allies coming without having to spend a lot in the long run. — Thunderbolt7 · 1 9/6/22