Hero Response: After an ally you control is defeated, discard Rapid Response → put that ally into play from your discard pile and deal 1 damage to it. 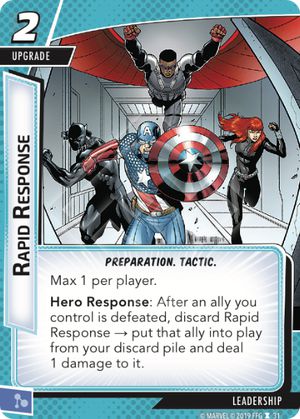 This is an absolutely fascinating card. I don't think it's an auto-include in every leadership deck, but depending on the allies in your deck - this card is fairly strong. The main combo points for Rapid Response (RR) are currently Nick Fury and Heimdall. While the numerical advantages of these interactions are fairly tame, the actual benefits it can provide in practice are nuts.

The above two were the most notable card combinations currently. But there are still some other good ones to work with:

Sadly, Rapid Response cannot be used with Make the Call to combo with out-of-aspect allies. This is because Rapid Response specifically designates "your discard pile".

It's worth adding that Natasha Romanoff/Black Widow will get significantly more value out of this card than any other hero in the game. Making Leadership Black Widow an oddly tempting choice.

Overall, it's a wild card to think about. The growth potential is certainly there. Each new leadership or basic ally that's released will need to be examined under this card's microscope. As will any hero's unique ally in their deck. Personally, if you plan on running this card, I would recommend 2 copies. Since only 1 can be in play per player, you increase the odds of drawing more Rapid Response than you need. Likewise, with only 1 copy - you risk never having it at all. The number of available targets can of course change that recommendation. If a deck is constantly popping Rapid Response, then 3 copies may be warranted.

EDIT April 3rd, 2020: With Spider-Woman now revealed as a dual-aspect Hero; this card receives a huge buff. Dual-aspect Heroes can utilize this card in conjunction with other bizarre card effects or allies. Combined with Team Training or Agent Coulson (which makes it an infinite).