Action: Exhaust Helicarrier → choose a player. Reduce the resource cost of the next card that player plays this phase by 1. 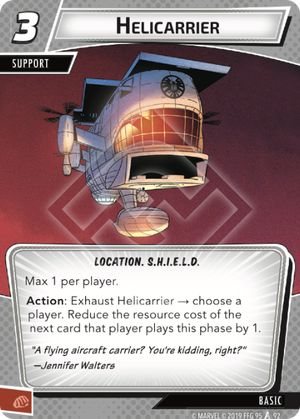 This is not just some random card that you may or may not throw into a deck, this is one of the core “power up” cards in the game. The general flow of the game (in a tough battle) is that you start out weaker than the enemy, try to survive while you power up, and hopefully power up to the point where you are stronger than the enemy, defeat all threats, and smash the enemy into the ground. And the way you power up is to play power up cards like this one, cards which give you a permanent benefit every round for the rest of the fight. And the most universal power up cards from the core set are Helicarrier and Avengers Mansion.

Your hero probably has some custom power up cards of their own, which are often slightly better than the generic powerups, and of course you will likely try to play those out. But the majority of heroes don't really have all that many custom power up cards and need to put more into their deck in order to power up sufficiently. After experience with playing the game, I have found it is better to add more powerups to hero decks which don't start with many, and add fewer to decks which already start with a lot (like Black Panther). If you are playing Iron Man, he already starts with an absolute ton of power ups in his own 15 hero cards, and he really doesn't need any more. By the time he is finished playing out all of his own powerups he is plenty mega strong already, adding more powerups to his deck just makes the game slower and more tedious as he sits around powering himself up more and more excessively, and by the time he finishes he is so powerful the game is pointless. While someone like Spider-Man or She-Hulk or Captain Marvel doesn't really have a lot of their own power ups and definitely need some more, so I often add at least Avengers Mansion and Helicarrier plus one or two smaller powerups (maybe swapping something out with cards from expansions, like Quincarrier).

In terms of functionality it should be noted that this is one of the big teamwork cards in the game, players in my game spend a lot of time either begging other people to give them an extra helicarrier action, or announcing they don't need their helicarrier and someone else can use it. But note that helicarrier is not a resource, so you can’t use it during the villain phase in order to help play a response or interrupt.