Hero Action: Spend a resource and discard this card → ready your hero. 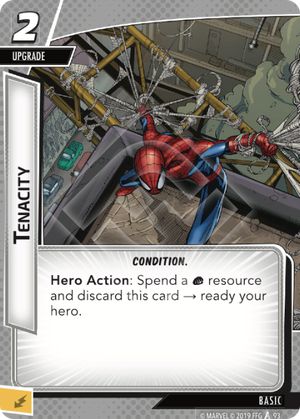 The value of Tenacity is equal to the value of what exhausting a hero/Alter ego can do, so let's look at the best-case scenarios:

So are any of these actions worth including Tenacity and paying 3 additional resources for? Potentially, if you are really worried about not having answers to an enemy or a sudden influx of threat in a future hand. This advantage is somewhat negated however by the need to have a specific resource in hand, meaning you might not be able to activate it when you want to. As such I think the strongest effect is potentially using it to recover as well as attack, thwart or defend in the same turn, as the amount of healing available through cards is quite limited at the moment.

At this point of the review, I have to acknowledge that I haven't played with Tenacity apart from the starter decks, where I'm pretty sure I just used the card as an resource. After this point, I removed it from my decks and haven't used it since, as it just looks way too expensive for what it does. Maybe I'm wrong about this, and it definitely has the potential to become more powerful if we see more powerful uses for exhausting a hero in the future.

The energy resource on Tenacity is actually a reason you might want to include it in a Captain Marvel or Iron Man deck in particular, but even for that I would prefer to include Haymaker or Emergency, which I will normally use for their resource but give me the option of preventing threat or dealing damaging if I really need to on that turn.

Verdict: Tenacity is a flexible card with a nice introductory readying effect that is simply overcosted for what it does. While I wouldn't currently include it in any of my decks, if readying becomes more powerful with certain heroes as more cards are released I will have to re-evaluate this.

Wilginator · 9
The benefit of a card like this, which may not be apparent if you've never played it, is that you can spend the two resources on a turn when you don't have much else to do, and then use the ability it in a future turn when you really need it. It's not a great card for everyone, but it can be particularly useful for She-Hulk since she has high ATK and REC values, and wants a card like this so that she can use One-Two Punch or Superhuman Strength after being exhausted by a treachery. — Archimboldi · 1 11/9/19
^^^ Word. Especially in solo SH. Tenacity plays can win you the game. Opportunity cost is a touch high for other core set heroes, but for She-Hulk, those massive 9+ burst turns can turn the tide. — Voidrift · 86 11/14/19
Echoing the sentiment of the reviewer - tenacity is a pretty bad card. 4 resources would demand either 5/6 Thwart or 8-10 Attack to be anywhere near equivalent to other cards in the game. The excuse that "vaulting" resources to use on a different turn, is worthless. Not only does the cost dramatically not meet the results, but I could have just as easily drawn a more useful card than tenacity. — RolandWright · 1861 2/19/20
"on a turn when you don't have much else to do[...]" — RabidHobbit · 10 4/11/21
...sorry, my previous comment was acccidentally added early. I was going to say that if you replace Tenacity with another 2 cost upgrade or support card, then you might have something to do! In other words, make a mental note of any situation where you didn't have anything else to do, then look through your card pool and see if anything jumps out that says "oh it would have been nice to have had that card in this situation.". Anyway, that's how I think about deck-building, but everyone has their own style. — RabidHobbit · 10 4/11/21