You get +1 hand size for each Tech upgrade you control (to a maximum hand size of 7). 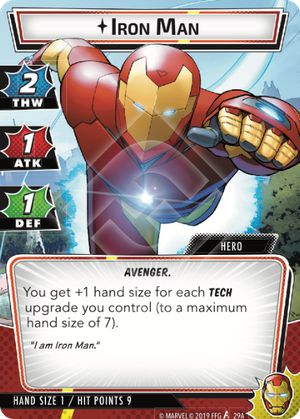 Futurist — Action: Look at the top 3 cards of your deck. Add 1 to your hand and discard the others. (Limit once per round.) 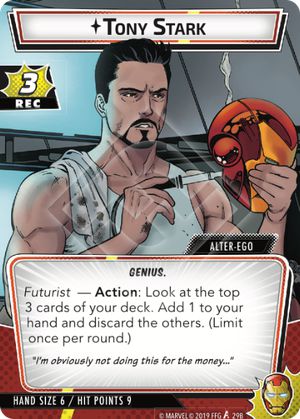 Q: Does order matter when discarding cards for Futurist? Or can you re-order as you like?

A: You should not manipulate the order that cards are discarded from your deck unless you are told that you can by card effect. (Developer Ruling , Hall of Heroes)

For those of us who genuinely love the Marvel characters and the stories that are told about them, theme is obviously a pretty large draw to Marvel Champions. I think one of the most exceptional elements of the game is just how well the Heroes jump off the board when you play them, evoking the best aspects of the character in their synergies and card interactions.

Almost a year in, this game has yet to see a true miss in terms of how the printed Heroes fulfill the fantasy of feeling like them- and yet, even in the context of superb theming game-wide, Iron Man is on another level.

In the comics and films, Tony Stark is more than just a billionaire genius playboy philanthropist. He's also utterly himself at all times, with everything he touches becoming about Tony whether anyone else likes it or not. How deeply, deeply fitting it is then that his Champions iteration is surely the most dominant Hero deck of them all in terms of how much attention it demands of the player. One of the things that makes his design so thematic is that no matter what other cards you're running, you're always going to be focused on Iron Man's core.

This is in no small part because the player actively has to put in work to turn Iron Man's Hero side text box into a benefit instead of a hindrance. Captain Marvel players can ignore Captain Marvel's Helmet if it's not conducive to their gameplan. Certain Thor builds ignore Asgard, Captain America doesn't always have to pack his deck with allies, etc. But the Iron Man player's deck is loaded down with tech, and not playing it as fast as possible means your Hero side will never become functional. Trying to actually play the game with Iron Man's base hand size has never been suggested by anybody because it is, of course, not ever going to work.

It will eventually pay off. Having a fully built suit offers a 7 card natural hand size, the highest potential of any Hero. Furthermore, Stark Tower and Pepper Potts can make building the suit a lot easier, enabling discard pile manipulation that, in tandem with Tony's Futurist ability, is both highly effective and very entertaining to certain kinds of Champions players. It's very much it's own thing and there is a chance you will be very, very into it. Through all of this, what's important to realize is that building up your suit isn't optional, and understanding that principle is key to understanding Iron Man. The gameplan of any Iron Man deck is always going to be about the suit.

And this is why it's probably good that a fully suited Iron Man is insane.

Aerial also doubles the damage of Supersonic Punch, singlehandedly transforming it from a perfectly fine card to one of the most efficient attacks in all of Champions. Supersonic Punching something while aerial is very good and very cost effective, and so it is a little nuts that it's arguably the second most effective attack at Iron Man's disposal.

Building with an abundance of energy resources gives Repulsor Blast the potential to hit big. Obviously, getting lucky and paying 1 resource for like 11 damage is incredible. But what's truly special about Repulsor Blast is that if you get one single energy resource in the flip, making the card 1 for 3 damage, that math is good enough to be worth it. Anything else is straight fire. The card is not without drawbacks- the inability to plan for the total damage amount makes it a risky choice for a crucial attack that must do a certain amount of damage, and discarding five cards off your deck before some of your important pieces are in place could definitely backfire. But at the end of the day, there's no denying that the card is amazing, and Iron Man players can find easy benefits in stacking their deck with energy.

That's Iron Man's whole kit- save War Machine, of course, holding it down as the only truly subpar card in the package. We have better ways to do damage, better ways to spend resources, and if your board state is bad enough to where his area damage ability is a good idea, you've probably got very large problems. Maybe one of those problems is that you spent 4 resources on War Machine...oh well. At least he's got a wild resource!

Every aspect is viable here. Leadership is about using allies to buy time while you build the suit. Justice is about leaning in to energy resources and your potent threat management- a "more is more" type of deal. Protection gives us additional tech in the form of Energy Barrier and Electrostatic Armor, keeping us alive while getting us to passable Hero hand size very rapidly indeed. Aggression? You're already going to be dealing ridiculous damage, might as well pile it on. Plus the cards are red and dang it, that's not nothing.

What is less certain is whether or not you will enjoy playing him. As I alluded to at the beginning of this review, Iron Man decks tend to all have the same gameplan, and often the games themselves have the same arc. You find the suit, you build the suit, you destroy everything. The process of doing this almost always involves some interesting decisions, and potentially some brain-burning discard manipulation, but it doesn't change all that much. It has singular appeal, and if you're not the kind of player who enjoys this kind of thing, chances are good that somebody in your playgroup is going to be.

And when the harder scenarios come knocking ("Earth is closed today"), you'll be glad that player is around. Fittingly for such an iconic character, Iron Man is set up to be a cornerstone of Marvel Champions for years to come.