Play only if your identity has the Avenger trait. 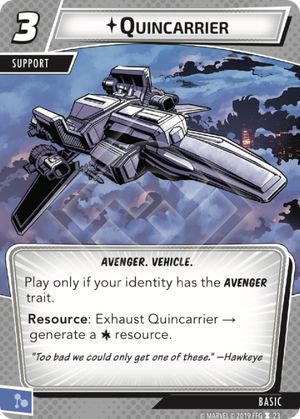 Although it lacks the ability to transfer its benefit to another player, for any Avenger this should be strictly superior to the Helicarrier in solo mode. When used to play a card it is at worst functionally equivalent and providing even on the villain's turn is fantastic. It's easier to power your Rocket Boots Iron Man, charge up your Lightning Strike Thor, meet with the Superhuman Law Division She-Hulk, power Photonic Blast and Energy Channel Captain Marvel, or land a Heroic Strike Captain America. Of course there are many more potential interactions with allies and neutrals. Bear in mind it is unique when building group decks. I expect this should see play

FreqKing · 14
You forgot that it has the most tongue-in-cheek flavor text in the whole game. Huge point in the card’s favor. — ImpossibleGerman · 4217 7/12/20
Agreed! — FreqKing · 14 7/17/20
Mind, Alter-egos are have not the Avenger trait. So, for instance, you cannot use Quincarrier for SuperHuman Law Division — ekalel · 1 7/17/20
I don't think that's true. You can put the card into play only as an Avenger. After that it's ability will continue to function regardless. — FreqKing · 14 7/18/20
Yes, I was wrong. You only need to be in hero form to summon it. Then you can use it without restrictions. — ekalel · 1 7/25/20
Is the card text referencing IDENTITY being misunderstood? Identity by the updated and original rules reference is the ENTIRE double sided card which represents your hero. NOT the form in which you are when you play this. In that instance, the only character so far to not be able to use this card is Ms. Marvel who isn't an Avenger in either form. It would play in either form since the card doesn't say "Play only if in your Avenger form". Any rulings to or posts to dispute this interpretation? — Iamserabith · 1 1/6/21