Hero Action (attack): Deal 1 damage to an enemy and discard the top 5 cards of your deck. For each printed resource discarded this way, deal 2 additional damage to that enemy. 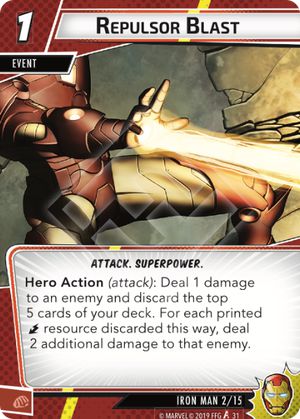 Q: Can Repulsor Blast’s first point of damage remove a tough status card from an enemy, then its additional damage deal damage to that enemy?

A: No. The additional damage that Repulsor Blast deals is a simultaneous modification of its first point of damage. For instance, if a player were to discard 2 energy resources due to Repulsor Blast, they would deal a total of 5 damage to an enemy all at once, as the additional 4 damage dealt by the discard effect happens at the same time as the first point of damage. -(Official FAQ)

Q: Does order matter when discarding cards for Repulsor Blast? Or can you re-order as you like?

A: You should not manipulate the order that cards are discarded from your deck unless you are told that you can by card effect. -(Developer Ruling , Hall of Heroes)

No review yet for this card.