Play only if your identity has the Avenger trait.

Hero Action: Heal 1 damage from up to X friendly characters (to a maximum of 3 characters), where X is equal to the villain's stage number. 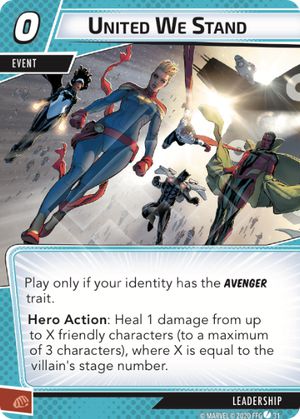 Consider you have an ally that does 2 damage with each attack and has 3 health. Fairly average. That ally will deal 6 damage total, over the course of 3 turns.

Now consider that you have three allies that deal 2 damage each and have 3 health. That's 18 damage total over 3 turns.

Either way you slice it, this card is pretty darn nuts. Also, keep in mind, you can use this on your identity and other player's and their allies. This is strong in all leadership decks, but I think it's at its strongest in an upgrade-centric leadership deck.

Notable drawbacks are that you must be an Avenger and in Hero form.

RolandWright · 1478
Of the 'Villain Stage X' cards, this is about the only one I can get behind. I agree that it can extend the lives of allies quite well (though I think you meant to say tat it heals more than 1 damage when the villain is in stage 3) but the math ignores a basic element of gameplay. — MacGhille · 112 7/18/22
It would take (typically) three turns to put allies into play that had three health. Which means you're going to be dealing with other things, and may not get all three out, or do so over a longer period of time. Which means you have to have the early allies lay off in order to survive long enough to reap the benefit. Don't get me wrong, I think this card is incredible for the cost (always at least one heal and you can heal your buddy's allies!) but the more likely scenario is that we will be healing two heroes and one or two allies. But in a game with a stage 3 villain, that can literally make all the difference. — MacGhille · 112 7/18/22