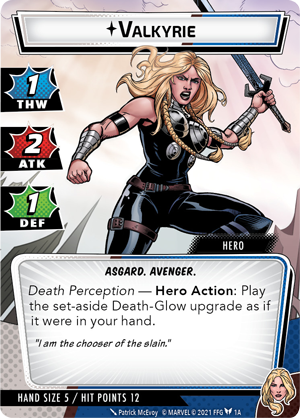 Valkyrie may look a little clunky, but I think she's actually OK. You'll benefit a lot from knowing what's in the villain's deck, and you really need Dragonfang (and sometimes also Valkyrie's Spear) to be good.

Against minion-heavy scenarios, being able to ready your 3 or 4 ATK hero for a cost of 1 (not even 1+card, as is standard for that effect!) any time you see a minion is super amazing, full stop. The key is to leave your Death-Glow out of play until you're ready to whack a minion. IF you know you're going to be flipping down to Alter Ego soon, and if you have the spare resources, it's OK to temporarily stick Death Glow on the villain to sneak in some extra damage, with the intent to "Not this day" before going back to hero form. But mostly you'll want to focus on killing minions and throwing shots at the villain as you can.

If you're against a scenario that doesn't have many minions, it's fine to just put Death Glow on the villain, and be a 4 ATK hero. That's good! Most heroes can't pump their ATK that high with their base kit. You get very efficient Shieldmaiden plays once you have the Spear: 1+card to prevent 5 damage is great. Chunks of your kit don't work as well in this paradigm (Flight of the Valkyrior, Chooser of the Slain) but are still usable, and you can always just use those to pay for the other 25 non-hero cards in your deck. And if some minions happen to pop out (or you draw Chooser) while you're in Alter Ego form for whatever reason, it's perfectly reasonable to "Not this day", put Death Glow on the minion, whack it, then put Death Glow on the villain. Here you've spent 1+1 for the two Death Glow plays, and readied your 4 ATK hero, which is reasonably efficient. And you also got to trigger any Flights you had been sitting on, which are very efficient thwarts.

What you don't want is to spend large portions of the game without Dragonfang, so mulligan hard for it. Thwarting is your biggest weakness, so include some cards to help you with that, and/or play with teammates who are good at it. You may want some cost-reducers (Helicarrier) and/or resource generators (Quincarrier) to help you deploy Death Glow repeatedly on those turns where there are multiple minions to take out. Having access to overkill and overkill-like effects (Relentless Assault, Into the Fray) helps make your minion-killing endeavors efficient, but don't overload on too many effects that only work on minions if you want to be able to handle low-minion-count scenarios.

P.S. Try to build so that you can consistently generate on any given turn, or you're gonna have a bad time 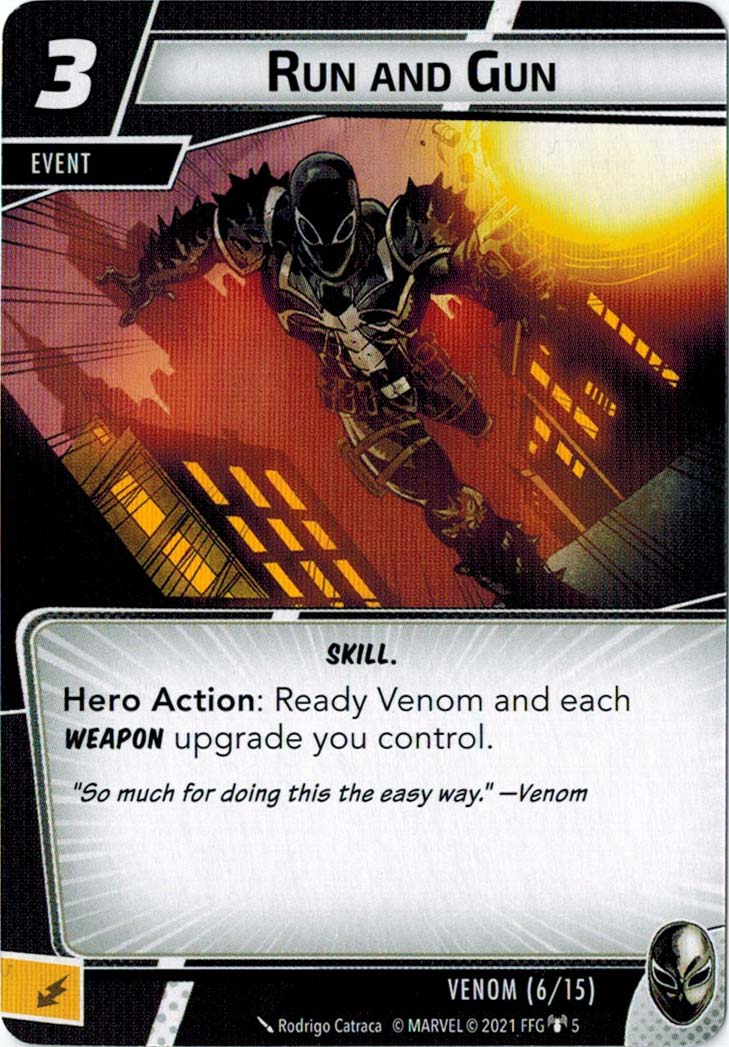 Run and Gun (RnG) is Venom's answer to Swinging Web Kick, but you have to work for it. By default, all you're getting is a measly 2 ATK or 1 THW, which is horrible for 3+card. With a full suite of Venom's signature weapons (Multi-Gun and two Venom's Pistols), RnG represents 6 damage, 5 thwart, or a mix in between. The flexibility is great, but not amazing on efficiency.

To make this super efficient, you'll need to A) get more weapons, B) get better weapons, or C) upgrade Venom. In the Galaxy's Most Wanted campaign, there are a few Milano mods you can pick up for better RnGs, but otherwise to get more weapons you need a Side Holster. At time of this review, there aren't actually that many weapon upgrades that benefit from a ready: Hand Cannon and Plasma Pistol can run through their ammo faster, but don't actually get more value, so really we're just looking at Godslayer. Not a big upgrade if it's replacing a Pistol, but as an addon in a holster it'll let you chew through most villains very quickly.

To upgrade Venom, you have the core staples Combat Training and Heroic Intuition to get an extra +1 out of every RnG. You could try Leadership for Moxie, Lead from the Front, Morale Boost, and/or R&D Facility. And for Protection, there's the Forcefield Generator -> Repurpose combo. Whichever aspect you choose, you can always wear a Symbiote Suit over your symbiote suit!

Overall: flexible mid- to late-game workhorse to clean up the board or close out a game, try not to play it until you're fully set up. 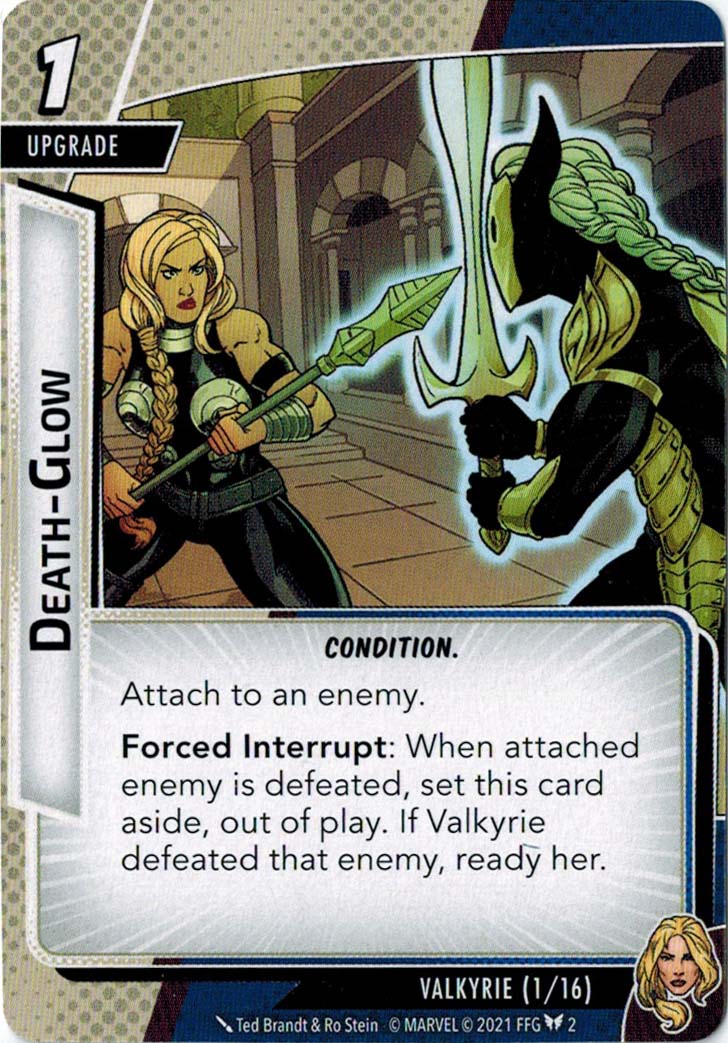 Issues abound with this card, and it is the reason why I consider Valkyrie to be clunky and underpowered.

Valkyrie can only attach Death-Glow using her hero action Death Perception, where it stays until the enemy is defeated or until returned using Brunnhilde's action "Not this day." Death-Glow is the only way to trigger Flight of the Valkyrior (2 copies) and Shieldmaiden (2 copies) and Valhalla, plus Valkyrie gets some conditional bonuses from Dragonfang and Valkyrie's Spear, and Have at Thee! (3 copies) gains overkill (FAQed to work as intended). Note that in order to trigger Valhalla or Death-Glow's ready effect then Valkyrie herself must be the one to defeat the enemy, not an ally or a support or another hero.

A nasty niche case exists where Death-Glow is attached to an enemy that leaves play without being defeated, at which point the rules state that the attachment is discarded, and therefore not able to be played again by Death Perception, because it is in the discard pile and not set aside.

Death-Glow is a barrier to entry to 5 of Valkyrie's cards while also locking away some of the value on 5 more of her cards, so if she chooses to ignore it entirely then she is playing with 5 blank and 5 suboptimal cards. Rather than enabling these cards, it is a tax that hampers her flexibility and efficiency especially considering her 5 card hand size and the burden of too many cards costing 3 resources.

It also tries to take her in too many directions at once. Valhalla, Flight of the Valkyrior, "Have at Thee!", and the ready effect only function when Death-Glow is attached to a minion, while Shieldmaiden, Dragonfang, and Valkyrie's Spear all shine when it is attached to the villain. Switching target from the villain back to minions requires going into alter-ego mode and is therefore slow.

This is compounded by both her obligation Trouble in Otherworld and her backbreaking Shadow of the Past, which each decimate what little tempo remains after playing around Death-Glow in the first place.

It could be "fixed" by changing the resource cost to 0, or Death Perception could change from "set-aside Death-Glow upgrade" to "Death-Glow upgrade, wherever it is,"... but in either case it would still be inferior to Nova's nova.

The_Wall · 105
What circumstances would cause an enemy to leave play without being defeated? Are any of those things that will happen without a misplay on Valkyrie's part? — Fry · 82 7/28/22 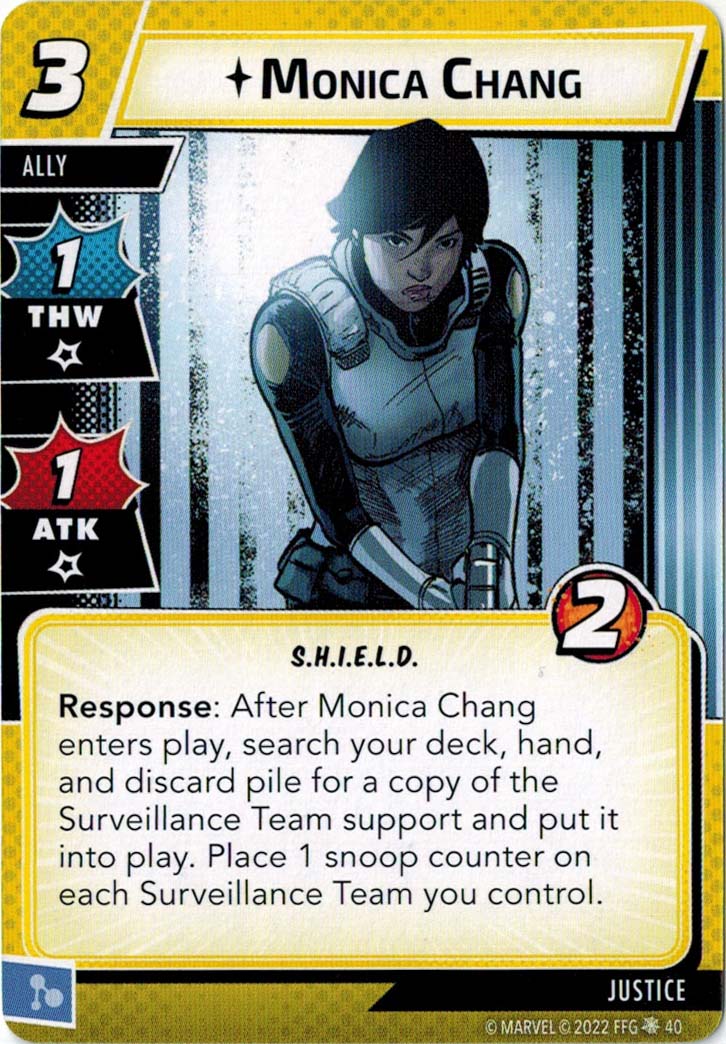 This ally is great. She is very hard not to include in most of my justice decks.

On their own neither Monica Chang or Surveillance Team are good value. But getting a free Surveillance Team with an extra snooper turns her into a great value card. You're essentially getting 5 thwart (over a minimum of 4 rounds albeit) and a chump block for 3 cost. What's not to love?

I usually run her with just a single Surveillance Team and just ensure I've cycled the snoopers before I reshuffle my discard pile.

jschaffer910 · 10
It is also worth mentioning that both Monica Chang and Surveillance Team have the S.H.I.E.L.D. trait, so they interact very well with Sky-Destroyer and especially Homeland Intervention and Dum Dum Dugan as she puts two cards into play. — The_Wall · 105 7/28/22
Monica and one Surveillance Team is indeed a perfectly fine value package to put in any Justice deck, but she gets extra value in a full SHIELD nonsense deck alongside three Surveillance Teams. That deck wants to have lots of random SHIELD things in play to exhaust for various reasons, so you're happy to have a couple Teams sitting there indefinitely on one counter until Monica can show up to give them another counter AND load up a fresh Team. Bonus if you have a way to recur Monica repeatedly (eg be Spider-Woman so you have Leadership access). — Fry · 82 7/28/22 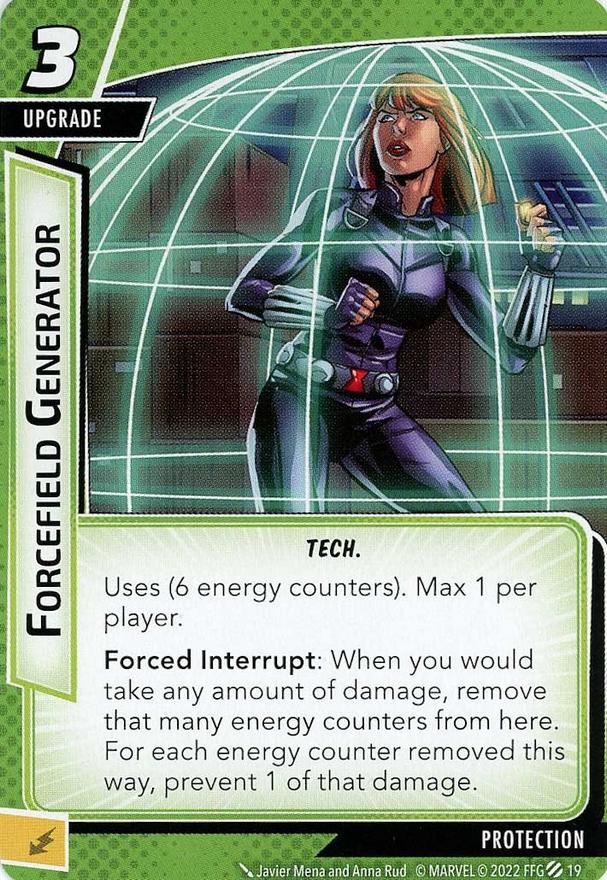 It's a little bit spendy for how much damage it prevents (3+card for 6 damage), but it does "stack" with whatever else you have going on defensively, so it's a nice backstop to keep your Dauntless active in the event the villain's boost cards don't fall your way, or in case you take some surprise extra attacks from an encounter card. It's also a damage prevention card you can play while you're not in Hero form, which is nice if you're running Meditation or other forms of Alter Ego economy.

And the combo with Repurpose (conveniently in the same hero pack!) is pretty spicy. Absorb 4-5 damage with the energy counters, then mulch your Forcefield Generator for a ready and a sweet +3 to one of your stats.