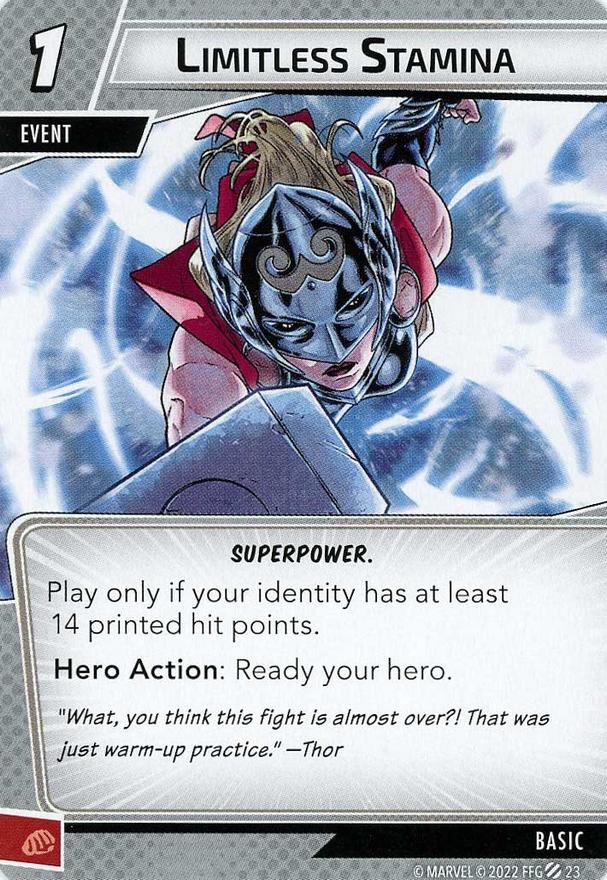 Another new buff card for the high-health heroes: She-Hulk, Thor, Hulk, Drax, Sp//dr, and Colossus. We've come to expect a cost of 1 for a ready effect, but usually with some additional cost or requirement (see Battle Fury, Ready to Rumble, Indomitable). Looking at the heroes who can play this, it seems most worth it to get the 3 ATK heroes additional attacks. 2 ER for 3 damage is neither spectacular nor embarrassing, but if you can buff it to 4 or higher ATK, that is good value. There is versatility in using it for additional THW, REC, or DEF, but usually the efficiency is not as good. I think the best inclusion will be for Drax, who easily can get up to 5 ATK with his hero kit alone, and gets paid off for basic attacks with DWI Theet Mastery. 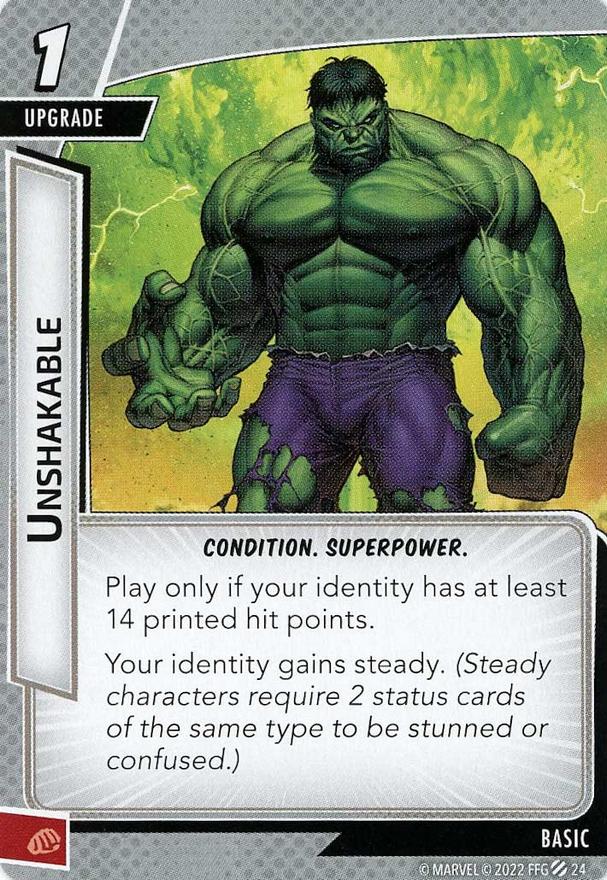 For reference, the 14-hp identities are She-Hulk, Thor, Hulk, Drax, Sp//dr, and Colossus (spoiled but not yet released). There is obvious overlap between high health heroes and heroes who want to attack almost every turn due to very high ATKs (She-Hulk, Drax), wanting to engage and kill minions (Thor), or wanting to smash (Hulk...see Hulk Smash). A stun status can basically ruin an entire turn, and Unshakable can really help.

Being steady essentially amounts to discarding the first, third, fifth, etc. status cards of the same type your hero gets. The next best alternatives are The Night Nurse, but only in protection, and Athletic Conditioning. I'd argue the Night Nurse is better if you are playing protection, but Athletic Conditioning is clearly worse as it is an event that must be played when you are stunned/confused, and Unshakable is proactive (and answers one of each status). Note that Thor gets Godlike Stamina which is way better than Conditioning but still arguably worse than Unshakable except for the healing.

If you want to play this card, check that your scenario actually has ways of stunning/confusing you, but if it does this is a game-changer for the eligible heroes!

Stretch22 · 190
For reference, the 14-hp identities are https://marvelcdb.com/find?q=t%3Ahero+h%3E13 — Fry · 82 7/24/22
I don't think it does amount to discarding first/third/fifth status cards. From what I've been able to gather, steady just lets you hold an extra, but then attacking/thwarting only removes 1 of those cards. I could be wrong, but I have yet to find a ruling saying both cards fall off. — SilverFox · 16 7/26/22
Looks like I can't remove comments, so this is a followup to say that I am wrong, it does work the way you mentioned — SilverFox · 16 7/26/22 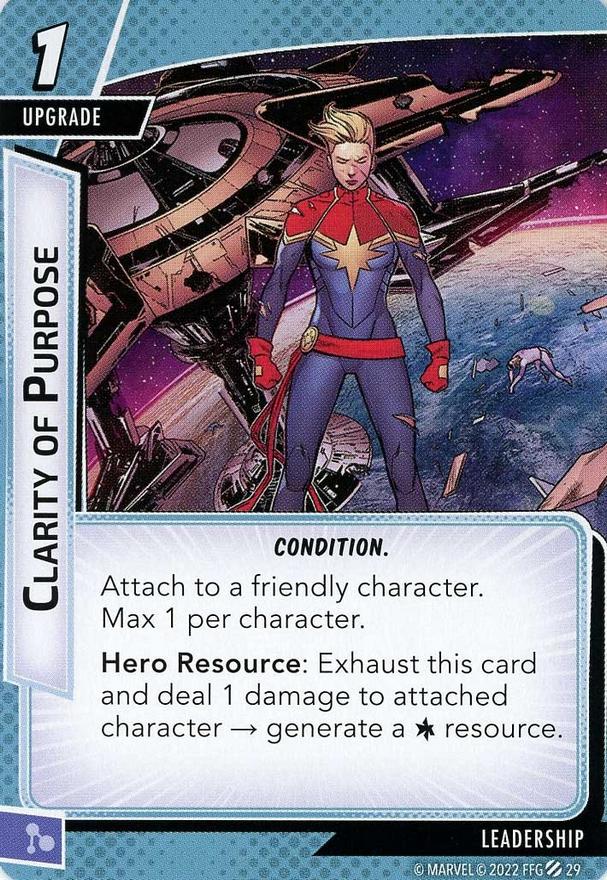 This is a great card! A Quincarrier without the "avengers only" limitation. Of course it benefits greatly Spider Ham, but I think high HP heroes are also prime candidates. Works well with Thor and I guess Hulk would be the best choice here. Nice for cards that use specific resources (Lightning Strike, Hulk Smash, R&D Facility...)

This dude is a top-tier mandatory ally in the current meta. He's a Champion, which allows a bunch of other cards to be deployed, and his basic THW and ATK are some of the best in the game for mandatory allies. But the fact that he generates a science resource once per Phase (not Round!) means he is probably about to get a deck built around him. Particularly considering how meaningful science resources have been in this cycle.

Someone is going to exploit the heck out of this guy very soon.

Sure, there is a limitation to this card, making it only useful for champions. But we have seen a number of champions show up recently that can fulfill this requirement.

The 'Vehicle' designation suggests there will be some kind of future limitation that we have yet to encounter.

All of that said, this is a frankly amazing card. Full stop. Incredible. Champions is different than several other cost-based card games, in that every card is always a resource. In a game like M:tG, swapping two cards for two more cards is only marginally beneficial, since that is a game that requires you to hold cards for extended periods to best utilize their effects. Also, you die when your deck runs out.

But Champions is all about turnover. You use cards to pay for cards, so there's no issue with churning through your deck looking for the best cards and combos, running through your 40 cards numerous times. A Support card that lets you cycle two extra cards each turn in search of the pivotal cards for your strategy? Delicious.

As opposed to Avenger's Mansion, it doesn't provide you with resources on top of deck-plumbing. But it DOES dig an extra card deeper into your deck, for two less cost. So you won't get that extra resource to play two 2ER cards, but you absolutely will have a better chance of finding the actual cards you want.

In my opinion, this kicks the literal crap out of Avenger's Mansion. You can argue that it never pays for itself like AM does, but the accelerated search through your deck for your best cards far and away makes up for it.

MacGhille · 118
Allies are characters, but they are not identities. — OrionJA · 7 7/17/22
Nice review. It was interesting to hear online that a couple folks didn't see the value here. This is an unlimited spiritual meditation, just for Champions. How is Spritual Meditation put into every Scarlet Witch deck, but this card is somehow bogus? — Judicator82 · 60 7/22/22
Spiritual Meditation is a great card: every time you play it, you break even on card count, but your card quality goes up a little. Champions Mobile Bunker isn't just "unlimited Spiritual Meditations" because it has a very real up front cost of 2+card. So you're putting yourself in a hole, card-count-wise, and hoping to dig out of it with improvements to your card quality over a long haul. I do think it's a good card, both because the game design tends to reward long-term value plays, and because you probably will recoup that initial investment (every time you find an extra double resource, for instance) but for some decks that payoff may take a long time. — Fry · 82 7/29/22
In the case where you have multiple players with Go For Champions decks, the Bunker is exceptional. That's because the difference in value between one GFC and any other card in someone's deck is so vast, that by finding an extra GFC you've more than recovered the cost of the Bunker. — Fry · 82 7/29/22
Everyone has made excellent points, and @OrionJA, I edited the review to reflect your input. Thank you very much. — MacGhille · 118 8/8/22
If I were to add a final thought, it is that we often get a little too caught up in pure cost as a reflection of value. — MacGhille · 118 8/8/22
...don't hit enter or even shift+enter when commenting apparently, lol. Anyway, I was saying that sometimes the value of the card is not in it's direct tradeoff between damage/thwarting/defending/additional resources. This card is a perfect example of the limitations of that perspective, because any day of the week I would rather be able to play this over Avenger's Mansion or any other draw 1 card effect. Even though there is no net gain of resources, if I can use my entire hand on a turn, then I can burn through most of my deck in four turns. For heroes that rely heavily on combos, this is a huge advantage. Naturally, it is limited to ramp/combo decks and Champion heroes, but man...it's really great in those scenarios, right? — MacGhille · 118 8/8/22