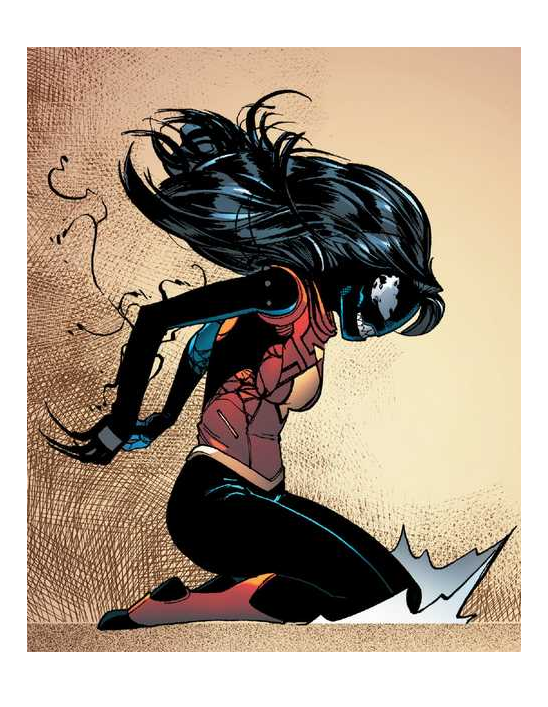 I'm no stranger to Spider-Woman combo decks aiming for 5/5/5 stats. A 5/5/5 Spider-Woman is one of those “achievement” moments that every player should experience! With the release of the latest stat-boosting cards, we are going to take it a step further by dishing out 25 damage in a single attack!

The Combo Wombo (Going All Out!)

• Go All Out is our big combo finish. The goal here is to set up x3 R&D Facility, Symbiote Suit, Heroic Intuition, and 5/5/5 stats from aspect cards, then flip the villain to stage 3 and OTK with a 25 strength GAO, enough to one-shot all stage 3 villains except Ultron and Thanos in true solo.

• Go All Out also fixes one of our weaknesses outside of OTK turns. Spider-Woman can be lacking for damage, only having a x2 attack event and her basic power, coming up short for beefy minions and the Sinister 6. GAO solves this by being a reliable source of 6+ damage (6 minimum, since GAO gives +1 to her stats by itself). You can hit a lot of break points: 7 (Heroic Intuition), 8 (x1 R&D), 9 (+1 aspect boost/Symbiote Suit), or 10+ any combination of the above. Despite sacrificing her basic action, defeating a boss minion in one go like The Sleeper, Rhino, MODOK, etc is worth the exhaust. You can even swap in a Push Ahead to OTK Light at the End in Sinister Motives.

Draw All the Cards

• Be aggressive with One Way or Another. It is a cheap +1 stats boost, sets up good Clear the Area + Skilled Investigator turns, and helps you set up fast. On your win turn, that hazard/crisis side scheme isn’t going to matter anyways! Every scenario has a good OWOA target if not more than one, and The Viper's Ambition is always a good target if you get hit by Shadow of the Past.

• OWOA, Skilled Investigator, and Clear the Area is a pretty easy combo to spend 4ER and draw 5 cards in solo, very helpful to draw into our off-aspect cards and Go All Out. Skilled Investigator is also the best Caught Off Guard and Reality Stone target, protecting our R&D Facility and Symbiote Suit.

• Once we are set up, we will be using search and draw effects from Kaluu, Maria Hill, Jessica Drew's Apartment, One Way or Another, Skilled Investigator, and Clear the Area to play cheap aspect cards and search out our Venom Blast and Contaminant Immunity to reach 5/5/5 stats.

Boost All the Stats

• Symbiote Suit gives us +1 stats across the board to deal with schemes and minions, defend when needed, or facilitate big GAO turns. The +1 hand size helps us draw into our combo pieces. The +10 hit points helps us stay in hero in a pinch. This is usually the last upgrade I’ll get out, but it is key. Spider-Woman doesn’t mind the extra encounter card with her access to tough/stun/confuse and reliable ability to heal or defend when needed.

• R&D Facility is our big stat booster. +1 to ATK and THW can help us smooth out basic activations when we didn’t get the aspects we needed that round. 3 uses are plenty to last us until the game ending Go All Out turns. It is surprisingly easy to play between The Power of Leadership and Finesse.

Smoothing it Out for Solo Expert

• Agent Coulson + Rapid Response is a time tested classic. Coulson searches Rapid Response, which brings him back when defeated, and then returns to your hand courtesy of Coulson again. Once set up, you are getting 2 THW and a block every turn for 2ER. I’ve found his 1 ATK to be useful for pinging tough before a Go All Out. If you forgo the block, you can THW, bring him back, and THW again. This is particularly helpful if you have a The Power of Leadership in hand to immediately replay Rapid Response.

• The Power of Leadership is the critical piece to smoothing out this deck. I don’t usually run Power Ofs in Spider-Woman, but here it is indispensable and speeds up our set up tremendously. Every Leadership card in this deck costs 2 with the exception of R&D Facility. PoL hits the requirement for R&D Facility and the requirement for Go All Out. With 10 targets, one of which being the perennial Rapid Response, we will never lack for a target. If we have a Leadership card and PoL, we can search it with Jessica Drew's Apartment, or vice versa. Not to mention, Spider-Woman’s best card, Pheromones, is a must-play!

• Justice Served is one of the best readies in the game. It’s a cheap +1 stats on the turn it’s played and you can pop it immediately or we can store it for turns where we boost our stats with aspect cards or R&D Facility. It also has the advantage of working off of Clear the Area and Inconspicuous, in case we had to defend in the villain phase or were otherwise exhausted. You could even basic attack->THW with an event->ready, making this a very flexible option if for some reason you need to attack first such as with Life-Size Decoy. It is another way to enable us to Go All Out, readying us before or after, and maxes at 2 ER for 10 value (5 + 3 + 1 + 1). In a stats-boosting deck, readies are key. If I could run another copy I would! Self-Propelled Glide is another good value ready, with the upside of being payable by Deft Focus, but the downside of needing to draw into it. Useful for removing stuns/confuses/toughs before our big turns!

• Deft Focus hits 11 of our cards including our 8 hero aspect cards, which we’ll be playing pretty much every turn. In addition to our x2 Finesse and card draw, our OTK is reliable and affordable.

Things I Tried So You Don't Have To (Options!)

• The original build had Moxie and Sonic Rifle, to try and flip more and set up the combo pieces in AE, then reach even more absurd numbers with Moxie (and on non-GAO turns, using Moxie to reach +2 stats). However, the additional damage Moxie brought was unnecessary in every game I played, and often it was just outright dead. It isn’t hard to ping tough with an ally, have some chip damage, or have a Venom Blast or Self-Propelled Glide ready for the OTK. I never felt I needed to reach 28, but the option is there for those who want it vs Thanos/Ultron! I replaced it with The Power of Leadership, which smoothed things out considerably.

• I also tried Morale Boost, but with Go All Out already boosting our stats from our hero interrupt, it was redundant to playing a Justice card before Go All Out.

• Sonic Rifle was overkill in a hero with x2 Pheromones, and was just a bit too expensive to play comfortably, conflicting with getting out our other important pieces. You could return the Moxie+Sonic Rifle for multiplayer or Thanos/Ultron, but even two-handed I didn’t find myself needing it. I swapped Sonic Rifle for Agent Coulson.

• White Tiger is another strong Leadership draw card. I wouldn’t fault you for running it, but I found that 3 is just a bad number for us, even with her refund. We much prefer to play copious 0/1/2 cost cards or cards you can play with The Power of Leadership outright. You could cut a R&D Facility, but that lowers our max Go All Out output to 23 and if you cut a Go All Out, it becomes harder to dig for when you need the game to end. The original build ran her, but I swapped her out for Rapid Response. Remember, we aren’t staying on Stage 3 long enough for her to draw us 3 cards!

• One weird weakness is our lack of , since we definitely want to be playing Pheromones, Skilled Investigator, and Jessica Drew's Apartment rather than spending them. The and redundancy is great for R&D Facility and Go All Out, but for encounter cards like Common Criminal, Weakened, All Tied Up and the copious others, we are reliant on Strength or the wilds from Captain Marvel, Symbiote Suit, and The Power of Leadership. Quincarrier could be considered, but I haven’t found space for it. It won’t help with Weakened, or heavens forbid, We Are One, either. Thankfully most of these can be played around until the OTK.

• There aren’t any modifications I can really recommend after extensive testing. Pretty much every Justice card is 0-2 ER in order to boost our stats quickly while thinning the deck and searching for our other aspect cards. Messing with the leadership half either changes the point of the deck or makes it less consistent on Expert Solo.

As always, I sincerely hope this deck performs for you and creates memorable moments!