"I gotta hand it to you, kid. This is one of the more impressive messes I've ever seen."
The Rise of Red Skull #32. Spider-Woman #1. 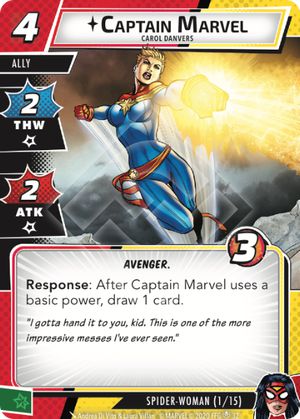 "Draw 1 card" is such a strong bonus that Carol is a reasonable build-around ally. At base, every two hp you give her (via First Aid, Reinforced Suit, a friendly Med Team) is worth 4 THW/ATK and two cards (which is enough to pay back the cards used, making the base THW/ATK a freeroll). If you're in Leadership, Sky Cycle (and/or Get Ready/Inspiring Presence) let you activate her more often, to take advantage of however many hp you can get her. And once you're using Carol 1-2 times a turn, then Inspired/Power Gloves become worthwhile investments, as all of these things (extra hp, speed, output) multiply in effectiveness when used on the same ally.

Now, a build-around is a bit risky if you might go turns without seeing Carol. But if you don't run any other Avenger allies (or only run Avengers that you're just as happy to throw buffs on, like She-Hulk), then Call for Aid can act as virtual extra copies of Carol. At the cost of accelerating your first reshuffle, you can have an ~80% chance of finding her in your initial draw, and a ~90% chance by turn 2 (not including the possibility of finding a Call in Jessica's apartment).

Run Leadership/Aggression with Carol & She-hulk (throw some Honorary Avengers and a Reinforced Suit on her) for a high-damage tag-team that justifies running multiple copies of buffs; run Leadership/Protection with Carol & Giant-man and go all-out with healing and extra untaps. Whatever your gameplan is, drawing 1-2 cards deeper into your deck every turn is likely to make it more consistent (and chipping away with THW/ATK never hurts).