Hero Action: Exhaust Sonic Rifle and remove 1 charge counter from it → confuse an enemy (deal 3 damage to that enemy instead if it is already confused). 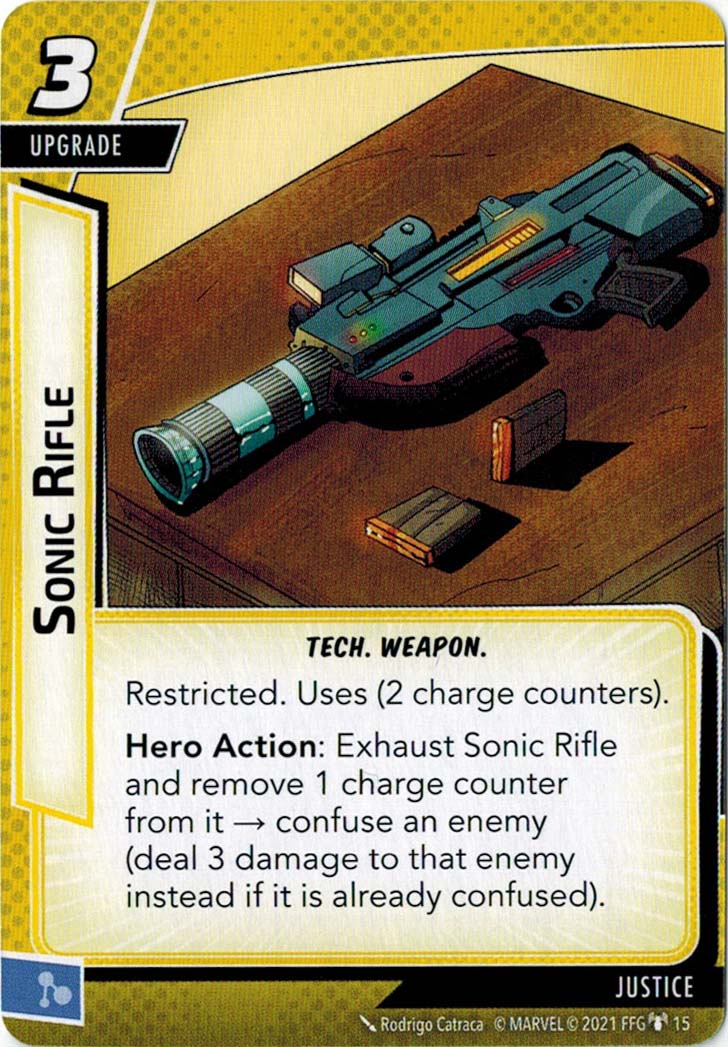 I don't think I will surprise anyone with the view that Sonic Rifle is going to be a huge card for solo players, almost up there with Under Surveillance. For heroes who like to change form a lot (She-Hulk, Ms. Marvel) it immediately adds a ton of consistency compared to Concussive Blow (which in my opinion was already a pretty good card). Two copies seem like an auto-include. For heroes who switch less often it still has the immense benefit that the second charge can sit in play until you need it, giving you much more control and security about the switch that you do make. One copy will be a fantastic investment.

I'm a bit surprised no one mentioned Iron Man yet:

AlexandreP · 13
Because it's got charges, does it not stay in play until replaced by other 'restricted' cards? If so, then it can carry on providing +1 hand size long after its ammo is all used up... — MarkyG · 1 9/16/21
Higher density of tech cards, the possibility to pass in alter-ego twice without the villain scheming, and once you have all the parts of your armor in play, you can still get value out of the Stark Tower. Yes, once the 2 charges have been spent you have to discard the Rifle but overal I think it has a lot of value. — AlexandreP · 13 9/16/21
No, you do not have to discard the rifle when it uses its charges — Stretch22 · 165 9/21/21
Oh yes you do, it says Uses. My bad — Stretch22 · 165 9/21/21
While this is a good option for Iron Man, think carefully on whether you go with this or Plasma Pistol. In a vacuum Sonic Rifle is unquestionable the better card, but for Tony's exact needs Plasma Pistol might just be better. It's cheaper, it's Energy rather than Mental, and Confusion isn't usually very useful on Tony as once you've flipped Hero, you probably should not be fliping back if you can help it. — Erathis · 5 12/29/21
1

Justice gets a weapon! Yeah. Although, I would like a Justice corollary to Jarnbjorn that does extra thwart for a mental, but this will do for now. Pay three to get two confusion is much better than three for one confuse in Concussive Blow. This gives you more control over the villain for flipping to AE or even use it confuse both villain and high scheming minion who keeps hanging around.