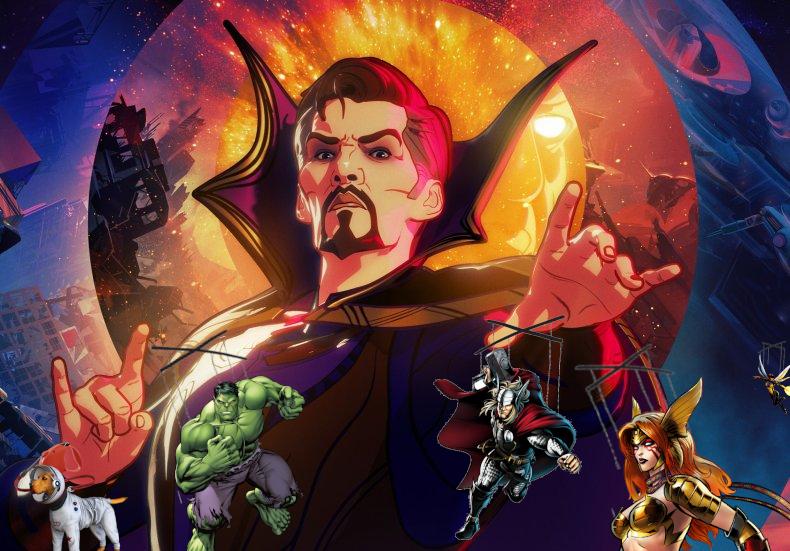 What if Dr. Strange lost his Wong instead of his hands?

A lot of Dr. Strange decks kind of play themselves: play invocations, get chump blockers, ???, win. This deck suggests a slightly different strategy. Instead of playing most of your invocations, you'll generally focus on Seven Rings of Raggadorr, and instead of chump blockers, you'll build strong attackers dealing massive damage and lots of keywords like overkill, piercing, and ranged. One major change to other Dr. Strange decks is you'll hard ever play Wong.

In this write-up, I'll explain the general strategy, card choices, and some other options to make the deck your own.

This deck is able to hit with strong ally attacks and build quickly thanks to Dr. Strange's fast setup and reliable safety. The general strategy for this deck is building your allies with strong attachments and keeping them healthy and swinging throughout the whole game. In general, you'll want at least one Avenger and one Guardian ally on your board, usually one Avenger and two Guardians. Try not to chump block with allies, but as you're building up early, it might be necessary to do so. Try to lean hard on Seven Rings of Raggadorr to keep yourself and your allies healthy while building up and also into the mid-game as you have a giant attacks with high consequential attacks soaked by tough.

Most Doctor Strange decks use all invocations equally (well, lookin' at you, Vapors of Valtorr). Seven Rings of Raggadorr is usually a stronger option in most situations, but it's by far the strongest for this deck. You don't need to use Crimson Bands of Cyttorak because tough can usually handle your problems, and you won't need the damage as much since your allies can punch so hard for you. After that, Winds of Watoomb and Images of Ikonn can help accelerate your deck my drawing cards and flipping with the security of confuse. Flipping helps you accelerate by drawing with Sanctum Sanctorum and shuffling Spiritual Meditation back into your deck (more on that in the next paragraph) and burn through to your better invocations with Natural Talent.

There are a few things to keep in mind when playing any Doctor Strange deck. The Sorcerer Supreme accelerates your deck so much, so definitely take it with every mystic hero. Even if you are competing for Sorcerer Supreme with another mystic hero, Spiritual Meditation is still one of the best acceleration cards in the game. Always play this as the first action you can on your turn, throw away something useless, and give yourself some new options. If you draw another one, be sure to play it before doing anything else. Whenever you use Sanctum Sanctorum, remember that it's a spell card and shuffle that back in your deck if you can.

This deck utilises many options to help buff your allies. Attachments include Energy Spear, Enraged, and Sidearm, further boosted by Boot Camp. Additional support arrives from As One! and Seven Rings of Raggadorr to keep your allies healthy.

The first step is building your allies' ATK as much as possible, up to around 6-8. Energy Spear and Enraged each add +2 ATK, and Sidearm and Boot Camp add a further +1. Energy Spear's piercing helps clear tough from your enemies to get the full value from your attacks. As One! adds an overkill option for clearing disruptive minions and advancing damage onto the villain.

There are many pathways to keeping your allies healthy throughout the game. The main option will be constantly giving tough statuses, through Seven Rings of Raggadorr and Throg, which ignore consequential, including the boosted consequential from Enraged. Sidearm additionally helps by ignoring retaliate. And finally, As One! deals damage equal to two of your allies' ATKs by simply exhausting them and protecting them from retaliate and consequential.

Avengers allies include Hulk, Thor, and Wasp. You'll want to have at least one for As One! and generally, you're just trying to play the first one that comes to your hand, but each of them have their own subtle advantages. Hulk has 5 HP and can easily tank hits without tough and can soak a large amount of indirect damage with or without tough. Wasp can't soak any damage, but has the same ATK as Hulk for 1 cost cheaper. Generally, just play Wasp for 1 and start building. Thor from the latest Valkyrie set offers a wonderful aoe attack for a single ; remember to give him a Sidearm to avoid all of the retaliate.

Guardian allies include Angela, Cosmo, and Throg. You'll generally want at least one so you can play As One! with one of your Avengers allies. You'll usually have two of these because the second will be Cosmo (more on that later). Angela comes into play easily, and if you can start building right away, can allow you to deal with the minion that she fishes out. Alternatively, you could bring out Throg, who enters play with his own tough status if you have a minion engaged with you.

Guardians love to break the rules, and there are few better examples than the interactions of this deck. Cosmo's ability lets you choose and discard a card from any deck and predict the type of card that will be discarded whenever he thwarts or attacks. If you guess correctly, he takes no consequential damage. This is important in this deck for two reasons. First, Dr. Strange's invocation deck is a legal deck target for Cosmo's ability. By using his ability, you can cycle the invocation deck and can avoid consequential damage. Second, you avoid all consequential damage, even the extra damage from Enraged. Just remember to attach Sidearm to avoid any consequential and be sure to use As One! when you don't want to cycle your invocations just yet.

There are a lot of lateral options for this deck. The skeleton basically is basically the same.

I hope you enjoy the deck. Dr. Strange is a fairly polarising hero, but I find this build is not only quite strong, but also really fun to pilot. Give it a chance if you're looking for something new from the master of the mystic arts. 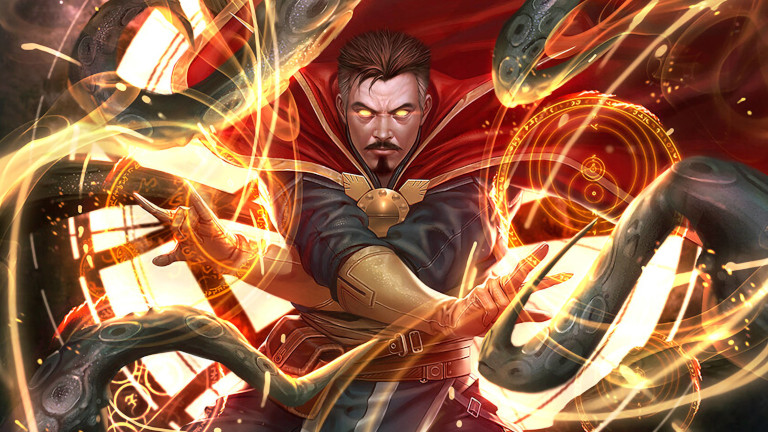