Attach to an ally. Max 1 per ally.

Attached ally gets +2 ATK and takes +1 consequential damage after it attacks.

"Should I be worried about him?" — Spider-Man
Captain America #31. 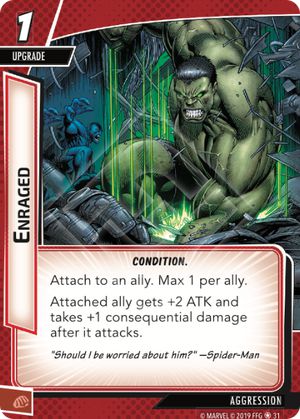 I am on the negative side of this card. I feel as though the card does very little to the game state. There is constant mention of putting this card on a very strong ally of strength 3 but all that you are doing is adding a small amount of damage or actually reducing the damage that the character dishes out over the course of the game.

I don't want to bring into discussion Hulk at the start because of the randomness he has, but let's look at any other generic character. If you have a 3 health ally with 2 attack power, you will get 2 attacks out of the ally for a total of 8 damage. They are doing 2 to themselves while dishing out 4 damage (2 base + 2 from enrage) on the first swing, followed by another follow-up attack that would do 4 damage.

If that ally were to not be enraged he would attack three times. Therefore you would have gotten 6 damage out of that 2 damage ally anyway. So you really only netted 2 damage. A card for 2 damage is not a "good card", it's average and it really only works that way if you found it when your ally was fresh. It actually gets worse with higher attack allies because you are robbing them of their damage they could have done.

A 3 damage ally over three turns would only net 1 damage since you would dish out 9 normally but would swing twice for 5 with this attachment dealing 10. And if you have lots of icons in a Hulk deck and can maximize 5 damage from Hulk, you are losing damage. Hulk alone with 5 damage per turn with a icon would do 25 damage (5x5). If he has the attachment on he only does 21 damage (3+2+2 x 3 uses). You do the damage slightly faster, but you do less.

I actually think that this card is a bad card, and your deck slots would be better spent on something else. These numbers get worse of course with even health allies, but I wanted to provide the benefit of the doubt of playing this on an odd-health ally.

With the addition of the upcoming "Teamwork" card from the Thor pack, this card begins developing lines of play that are far more optimal.

Running a She-Hulk Leadership deck and got an Aggro-something backing you up?

Enraged Inspired Energied Vision has an ATK of 7. Add this to the 5 ATK she gets with Superhuman Strength on, and now you're bonking him for 12 + a stun - and your overinvested dangerous Vision is on the table, ready to strike for another seven on this turn if you have Get Ready.

Combine enraged on Cosmos in a Doctor strange deck to hit at 3 damage each turn and discard your top invocation card, thus not taking any consequential damage, it was a interesting combo Personally, i build the deck with neutral card (like lockjaw, meditation,...) and only this aspect card and it was rolling

This card just screams HULK SMASH! to me. Super cheap cost and the strength resource helps to trigger Hulk's ability to deal 2 more damage to an enemy too. Hercules really likes it as well. This is just an awesome aggression card.

I think this can be very efficient in a Groot deck thanks to "We Are Groot": the tough status card prevent all the consequential damages so as long as the ally attacks only when it has the tough status your ally as simply +2 ATK.

It's especially interesting with Rocket Raccoon as when he attacks a minion, he now has an ATK of 6 and Overkill !