“Nature made me a freak. Man made me a weapon.” - Wolverine, the Logan movie

“Fantasy Flight Games made me a freak. Rapid Response made me a weapon.” - Jubilee, this deck

This deck has three key ways to get incredible value:

And all of these, of course, love Utopia!

The combo with Jubilee can instantly end a game, with a minimum of 19 damage and - with just a few more cards - upwards of 35+! Better yet, the individual pieces of this combo are still great on their own, making the overall deck very consistent.

If you like this deck, feel free to give it a ❤ ! Thank you! 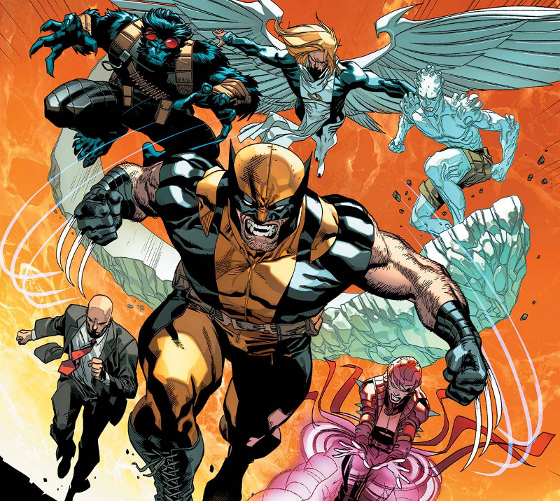 This deck is built around the concept of getting incredible damage out of recurring Jubilee. By having her enter play multiple times on a single turn, you can get some crazy damage bonuses. However, other X-Men also benefit from the cards she likes and often, with Wolverine’s crazy damage, you can win before even lining up the full Jubilee combo!

Wolverine is already blessed with great threat removal on top of his amazing damage. As a Leadership deck, this deck is - for the most part - an all-rounder that shores up every pillar of the game. This makes it suitable at all player counts.

Your mulligan priority is as follows: Utopia, The X-Jet, Helicarrier, Clarity of Purpose, and Adamantium Skeleton.

Once you have any of your three consistent resource generators in play (X-Jet, Helicarrier, or Clarity of Purpose), Adamantium Skeleton becomes the next most important upgrade to play. You should also aim to play at least one Command Team and Rapid Response per deck pass if possible.

Jubilee is the star of the show, the prime bub herself. Her Response can stack multiple times on Wolverine in one turn as you repeatedly bring her into play with the likes of Rapid Response, Pixie and Make the Call.

An ideal setup will include the following 4 upgrades/supports in play:

And the general order of operations is then:

In total, this amounts to 21 damage (5 + 3 + 3 + 7 + 3) which is enough to end many solo games. And, if putting the whole thing together escapes you, even just part of the combo is excellent - even playing Jubilee on her own, with no combo pieces, is great!

Fortunately, it's not hard to put this combo together. And you can even boost your potential damage on a turn much higher through one or multiple of the following:

(Jubilee adds +2 ATK to basic attacks made against a target by Wolverine and Jubilee herself. This bonus stacks on Wolverine if she enters play multiple times in one turn, and possibly stacks on herself - we're awaiting a rules clarification from FFG! If it does stack on her, this combo will do +2 damage!)

Don't be afraid to use charges of Command Team on Professor X if you'll get use from his THW. And don't forget that, if the stars align, you can use him to ready you on a Jubilee turn for major damage!

The blue bub Beast brings both excellent value and a balance of great ATK and great THW. He is a fantastic in almost any situation. Although he costs an initial investment of 5 effective resources (4-cost and the card itself), by finding a resource card from your discard pile he effectively refunds a huge chunk of his cost, making him equivalent to a 2-cost instead of a 4-cost in most cases.

While Rapid Response might gain more value when used in the Jubilee combo, there's no point in holding onto it to use with her only to be defeated by other means. If you're under pressure and both Beast and Rapid Response are available, don't hesitate to use Rapid Response on him instead!

The aim of the game is to build up all the pieces of the combo while using the inherent power of both Wolverine's kit and the X-Men allies to control the board. Utopia in particular shines on any turn you play any X-Men ally, not just Jubilee, and you should use Rapid Response and/or Command Team on other allies too if necessary.

In addition to Professor X, Colossus is a great target for a use of Command Team - whether to gain tempo back after saving his Tough for the villain's attack, or for an immediate burst of 6 damage.

There's no point in building up to a combo if you lose before you can pull it off! Solid immediate value is better than incredible later value if it keeps you in the game.

Both Beast and Professor X will do incredible work to keep the board under control and should be your main targets with Make the Call. If you draw Make the Call and one of them is in your discard pile, you should probably use it on one of them! (Unless Jubilee is there and you're ready to unleash the combo.)

If you want to break from the X-Men theme, Maria Hill is an easy addition who can replace Gentle.

Lead from the Front can increase the Jubilee combo even further, though it can have limited value otherwise and clog up the deck. Add this if you want to make big number go bigger, and leave it at home if you want to better your chances of winning.

Cerebro can help you to find Jubilee or any other X-Men ally of your choice. Personally, I don't think this is worth it given its conditions (alter-ego, chance to miss with no psionic) over the many other excellent cards Leadership has available, but it is a strong option that may work for you.

Uncanny X-Men is a very powerful card that does a lot for this deck overall, but makes the Jubilee combo harder to pull off as now you need both Command Teams in play to spend all her hp in one turn and trigger an immediate Rapid Response. But it's so good it's still worth considering - I suggest either bringing a third Command Team if you go this route or dropping all your Command Teams+the Jubilee combo altogether.

Good luck and have fun! And special thanks go to journeyman2 for his contributions!