Lead from the Front

Hero Action: Choose a player. Each character that player controls gets +1 THW and +1 ATK until the end of the phase. 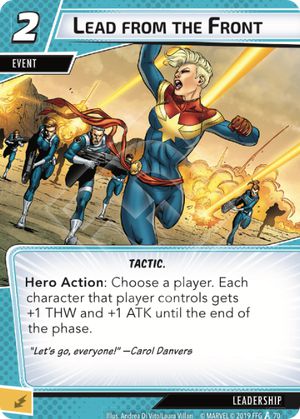 I think that on it's own this card is pretty versatile in the right situation. It gets more powerful based on the number of allies, but it is somewhat unusual to have 3 allies out on the table at the moment. But, it is pretty common to be capable of getting 2 allies on the table. Since your hero is also a character, with 2 allies on the table you would have a flexible 3 damage or 3 threat removal with this card.

This basically will add 1-4 damage and/or threat removal on the table. You will likely play this when you have 1 or 2 allies. In that situation it is 2 resources for 2-3 damage and/or threat. That isn't great in comparison to less situational cards like For Justice! or Haymaker for the same cost, but it's a nice support card in the Leadership role and you can split how it will be handed out.

You might be sacrificing an ally that you were originally intending to use for soak at that point in order to take advantage of the event since you won't be sitting on multiple fresh characters at the time.

You can get extra use out of the card with Get Ready or Make the Call pulling someone back at the right moment.

I think that it is a pretty solid card to include but because it has minor situational plays it is likely best as a 1 or 2 of in a deck and not a triple.

I keep trying to include this card in decks, you can have some fun using it from time to time, but it really is a pretty mediocre card. The problem is that in order to even break even from an efficiency standpoint, your team needs to thwart three times after using this card, or do a combination of 4 attacks and thwarts. But even a full team of you and three allies is only four characters, which will usually have at best 4 actions of various types to perform, and thus will at best break even. Now of course, there are ways you can produce extra actions and potentially make this card hyper efficient, such as by increasing your ally limit and using effects that ready characters, but this is usually outweighed by how overwhelmingly likely it is that you have less than a full ready team to play this on. There are just so, so many reasons why you would not have a ton of allies in play or you would not want to exhaust every one of those allies for an attack or thwart. So unless you have set up a specific clever combo to maximize use of this card, it is likely to be a card that is only OK some of the time and gets used as a resource the rest of the time.

cnalexander · 84
Tl;dr It's a combo card and not a value card — Bojkan9413 · 1 7/24/21
It may be better in characters who have native untaps themselves, such as Quicksilver, Captain America, and Iron Man because then you only need one ally in play to break even, but I can't say that I've been particularly impressed by this card either. — Death by Chocolate · 3 7/25/21
As Bokjan says, it’s a combo card that is best used with ready effects. If you get 2 attacks from a 6 wide ally board at +1 ATK, then you have paid 3 true resources for 12 damage and have made an efficient play. It just shows that most cards need to be evaluated in the context of specific builds rather than in a vacuum. — Ionichk · 8 10/24/21