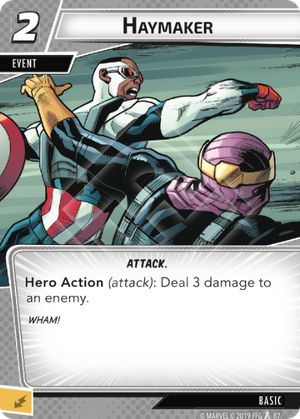 This is one that I tend to splash in a Justice deck when I am playing one sometimes so that the deck has some aggressive removal. There doesn't seem to be anything special about it and I assume you won't be seeing it all that often in decks as a staple card.

It is also one that might make sense to play for Ms. Marvel. She gets the opportunity to pull it back to hand and it is cheap enough that it can be played easily twice.

Bronze · 200
Haymaker is just a good, generally well-rounded card to add in any deck. 2 cost is about average, and 3 damage to beef up your offensive capabilities, (in addition to any hero's or Ally's basic attack damage), can make a difference and remove minions in a single round. Also doing 5-6 points of damage to the main villain, (using this card + basic ATT), is also handy. Don't underestimate this card! — bmay511 · 168 2/24/20
I don't want to write a whole new review because this is pretty accurate if all you own is the Core Set, but for people reading this in 2022 or later, Haymaker is a bad, bad card. "Worse than Haymaker" is a common phrase when describing new attack cards that seem bad, or are at least bad in their worst-case scenario. Try to upgrade as soon as you buy more products with more options — Stretch22 · 231 10/20/22