Action: Heal 2 damage from any character.

"Does it still qualify as first aid if it's your second day in the hospital?" — Clint Barton
Core Set #86. 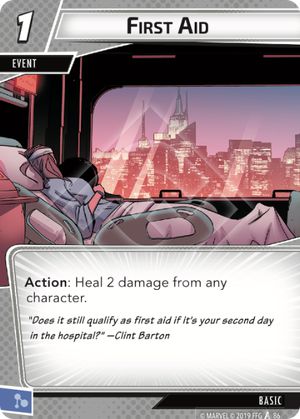 When I first saw this card, I thought it was meant to be used on players, and I thought it was a weak card. Spending two cards to heal two points of damage he is not very efficient at all, it is usually much easier to take a recovery. Later I realized this card is primarily meant to heal your allies, and is one of the generic cards that is actually rather good and is tempting to include in a lot of decks. Healing an ally of two damage so they can perform their action two more times is really great. If they have a thwart value of 2, that means you are spending two cards to remove 4 threat, which is super-efficient. And you can even use it on your friends’ allies! Of course you can't do that all the time, sometimes there are no suitable allies or you need your allies to chump block for you, but that is why the game lets you pick which cards to play and which cards to use for resources.

What makes this card good is healing allies, but occasionally you may use it to heal yourself or another player in a situation where someone really needs healing and there is no better way to do it.

It can be used in both alter-ego and hero forms and help top-off your character when you are getting a bit worried. It might even keep you from the need to do a recovery turn. When you bring that into the potential for the card, it might be adding additional threat reduction or damage in on a turn where you wouldn't have had one.

I don't find myself needing to recover or heal much throughout a game, so I don't include this often. I don't tend to consider this one often unless I am using the leadership aspect. A friendly ally with Inspired on them can do some serious work if they find themselves getting First Aid even a single time throughout the battle. Even without the Inspired, this could be an extra 4 threat / 4 damage provided.