Interrupt (thwart): When the villain schemes, reduce the amount of threat placed on the scheme by 1. 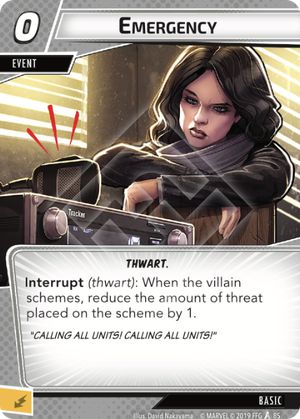 Emergency isn't a card that I include in a lot of decks, but I believe that in some heroes/heroines and with a certain spec, it is a card that I will include in a couple decks. Jennifer Walters is one of those heroines. She consistently will be changing between alter-ego and hero form in order to take advantage of her built-in hero ability. Jennifer Walters already has a built-in reduction when she is in her alter-ego form. That can be used at the first step of the villain phase, and the emergency will help you reduce the threat further when the villain actually schemes from your transition into the alter-ego phase that turn. This way, you only suffer hopefully 1-2 threat during a turn that you spend in that alter-ego form. At 1 threat, it would have been the same as on a She-Hulk turn without the counter-punch you would likely have received. This can also be helpful in the early turns for Iron Man when he is building up his tech and is getting hit with the early threat. If you can manage to spend this resource to slow down the enemy until you are more prepared, it's a card to consider.

I also think that the Justice aspect might be spending time in their alter-ego forms a bit more than the others because they can deal with the threat a bit can take advantage of the card more often. I find many of the other aspects I might spend too much time in hero form that the card won't be useful for thwarting in single player. Multiplayer this card gets a bit better on the number of players because someone will be in alter-ego more likely.

Bronze · 172
Good assessment. I agree that this is a viable choice for Iron Man. Allows for some breathing room to stay as Tony as you build, and synergizes nicely with Repulsor Blast. — FreqKing · 24 1/9/20
I think Ghost-Spider also really likes this, as she readies for the cheap cost of one card with this. — Angelcollector · 25 4/14/22
0

Emergency in itself isn't usually a card I include in any deck, as its effect is too small to justify the opportunity cost of having a different card. However, there is a very niche situation where this card becomes critical: expert mode Ultron with a single hero.

In that scenario, Emergency breaks the scenario to bits. Holding Ultron in Stage 1B gives ample time to set up without the pressure of multiple drones; once the scenario inevitably advances, Emergency blocks the Forced Response effect of Stage 2B entirely in solo, preventing the drones from spawning and defending Ultron III. And even better, should the game progresses to Stage 3B, emergency is worth an extra round and is one of the few thwart effects that works (because it prevents threat from being places, doesn't remove it). As scenarios with similar conditions inevitably appear, Emergency might be worth including in solo as well.

SUMMARY: too niche to be played, but very effective against Expert Ultron.

Stef · 7
Correction: I just noticed that it only works when the villain schemes, so those interactions don't really work. ^^" Still worth it in Ultron for Stage 1B control. — Stef · 7 4/22/22