As he came into the side scheme

It was a sound of a TBE

He came into the last phase

He left bloodstains on his EMH

Villain tried to hide behind guard

But he called for the avengers

Tried to stay at arm's length

But villain struck down by giant strength

Villain, are you OK?

So, villain, are you OK?

Are you OK, villain?

You've been hit by—

Ant-man has finally arrived in the land of middle-earth, and I am so excited to finally try this hero out. The fun factor is definitely a thing that must be experienced to truly understand, and this is the first deck iteration I've come up with, and it truly is a blast to pilot. I would say this has a medium to low floor with a very high ceiling, so (hopefully) it doesn't become boring after just a few plays). Now I know your days of breaking into places and stealing stuff are done, but I want you to break into a place and steal some stuff.

This write-up will cover the premise of the deck and its basic strategies, then move on to specific card inclusions and finally cover the big 'combo turns' that are going to close out the game in one big massive turn. Let's begin. 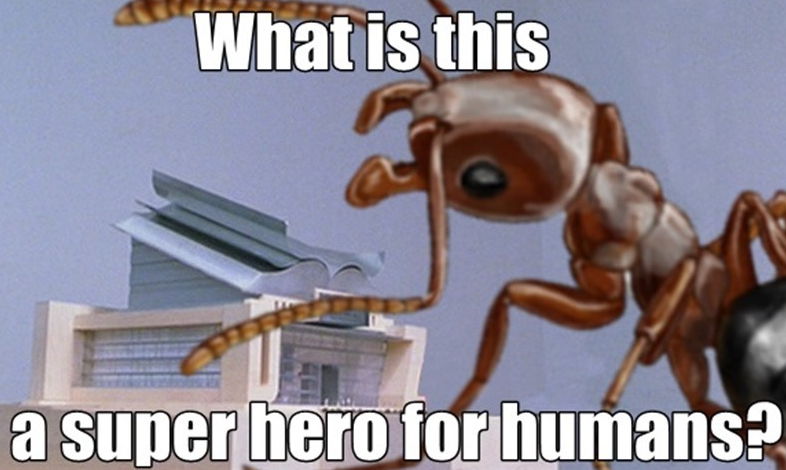 Although the core of it: Resize, Swarm Tactics, and Earth's Mightiest Heroes can be used in any aspect, Leadership provides some specific pathways for making the deck work. First, it's the only deck that can get to 6 allies on the board with Stinger and The Triskelion, but that's just incidental for the real reason: Strength In Numbers. Being able to draw upwards of 6 cards in a single turn is huge, especially since you can still afford an Avengers Assemble!, play another one, and still be ahead in your card count. It also has plenty of good targets for Earth's Mightiest Heroes. So far Aggression is the only other deck with a decent number of Avengers allies, so Justice and Protection would need to rely on Honorary Avenger, much less card draw, so things get really fiddly. And finally, after drawing so many cards from Strength in Numbers, Resize, Ant-Man's Helmet, etc., you'll end up with a lot of extra resources in your hand, and what better way to spend them than on an Avengers Assemble!?

Here's a bit on the strategy and deck goals. In general, try to keep your allies on the board. I know that it's so tempting to throw them in front of an attack when they have 1 HP left, but they're necessary for Strength in Numbers. Thankfully though, Ant-Man can take the brunt of attacks with his 12 HP and the sustained healing from Pym Particles and Ant-Man's Helmet. With any number of allies, even 1, play Strength In Numbers to keep digging through your deck to assemble the pieces you need. You want to make sure you get down the following cards:

Once you have passed through your deck once, you will start to see how quickly you can dig through it again and again and build for some pretty big power turns just using Ant-man's basic attack.

One final note before we move on: the deck includes 2 copies of Call for Aid and not Make the Call or Rapid Response. Make the Call could have value in this deck, but it is anti-synergistic with Team-Building Exercise; if you want to modify it, just keep that in mind. Rapid Response doesn't have as much value because you will sometimes need to play allies to overwrite others you already have in play. And finally, Call for Aid will help recycle your deck faster after a combo turn so you can combo again sooner. There are more than 6 avengers allies here, but you can still dig through quite a bit faster and potentially complete multiple combos in the same turn. Let's have a look at what those look like now.

The most satisfying thing about this deck to me is how many different paths to victory you have with equally-satisfying combos. Here are the basic skeletons for them with lots of potential for more with how many cards this deck can draw in a turn. Don't be afraid to hold onto some of the pieces at the end of your turn, even playing nothing from your hand and waiting for the following turn when the math is better.

Requires any of the following:

What's truly wonderful about all of the above is that you can still attempt any of them with only a few pieces in hand and a trusty Avengers Assemble!. Additionally, cards like Resize, Ant-Man's Helmet, and Pym Particles (played while in tiny form) will help dig for the remaining pieces. Now let's move on to the combo in action.

After either setup, simply attack with Ant-man and ready as often as you can with Earth's Mightiest Heroes and Avengers Assemble!. Even at 1 ready, you will have done at least ~20 damage, plus any from Army of Ants, and you might have extra boosts from Avengers Assemble! and if you're closing in on the win, you can use your allies to help finish off the villain. On top of all of this, you will have spent very few resources and will have the option of playing a Giant Stomp, activating your Wrist Gauntlets, or definitely have enough for Avengers Assemble!.

The mini combo is essentially a smaller version of any of the above and can be done at any point in the game while you're still setting up your pieces. Just perform as much of the combo as you are able and continue setting up if possible. When your board is fully set up, it's totally fine to hold onto some pieces in your hand and wait to draw the rest of them on the next turn instead instead of trying for a mini combo (unless it'll win you the game, but that would be a bit anti-climactic!).

If you have time, you can also build up your ant army and giant strength, but on your first pass, it's less of a priority. Don't be afraid to pitch them as resources. I know it sounds blasphemous, but we're building for something better, faster, stronger. Once you're ready to start going for the combo, definitely make sure you have some Giant Strength ready to go, and don't just throw them out. If you can, certainly play them. Having at least 1 Army of Ants is great as Caught Off Guard fodder. The same can pretty much be said for Wrist Gauntlets, Hive Mind, and Giant Stomp as well.

Keep an eye on what's in your discard pile for whether or not you should be trying to mill with Call for Aid. If you're going to discard something really important you need while still setting up, probably best not to risk it.

If you start in tiny form and have all 3 form change events, you can end your turn as tiny after you've completed your combo to try to set up again for next turn if your deck is about to cycle again.

Team-Building Exercise works to help pay for Giant Strength, but remember that if you are in tiny form and ready to start your combo, you should play Giant Strength first because it only triggers when you change form. If you want to play it with TBE after the swap, it's too late to gain the bonus, so definitely try to play Giant Strength while in tiny form before you swap if you're going to use Ant-Man's attack that round. If you already started in giant form, it's totally fine to play it first before swapping (whether you're going for the combo or not).

If you're in the middle of your combo, have an ally in hand and an Earth's Mightiest Heroes, but all your allies on the board are exhausted, don't be afraid to play one and overwrite an existing ally. With the help of Team-Building Exercise, Avengers Tower, etc., the ally won't cost as much, as you're still pumping out an extra ~7 damage, so it's definitely worth it. In lieu of that, you can also hold back an ally and only play Strength In Numbers for 5 while digging for pieces. When you deck is thin enough, you'll have a really high chance of drawing the rest of the pieces you need and actually have a lot of extra cards left over anyway.

Remember to have Wasp in play so you can play Swarm Tactics.

If you're really desperate, definitely throw an ally in front of an attack for you, even if it's 'inefficient'; more plays will help you determine when the best time is to sacrifice your allies for the greater good.

Lastly and most importantly, have fun!