Hero Action: Discard cards from the top of your deck until you discard an Avenger ally, then add that ally to your hand. 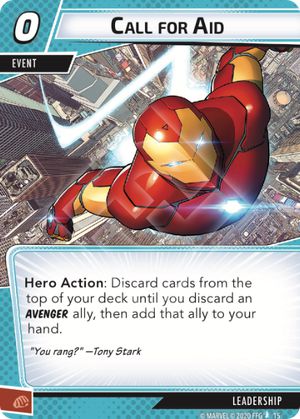 So what happens if i have no avengers allies in my deck or discard? Would you just go through the entire deck then discard and reshuffle and be done, basically a way to reset your deck if you need something from your discard and don't want to wait.

Maligx · 11
I actually built a decklist with lots of upgrades and only Iron Man as an Avenger ally. Other allies thrown in the discard can be played using "make the call". But I didn't see the "reset your deck" aspect. Thx for the catch! — neothechosen · 6468 11/10/20
@maligx That's tricky. I suppose in a way, or you would keep doing so until you discard an avenger ally. That would enable an infinite loop making unviable. — dysmania · 1 11/10/20
@dysmania - there would be no infinite loop, if you are asked to discard cards and you run out of deck you stop, ie "discard cards untill you discard a minion" will stop if you discard entire deck w/o finding a minion, also for example if you are Iron Man and play repulsor blast with 3 cards left in your deck, you will discard only that 3 cards — Aatxe · 7 11/11/20
@maligx. The issue is that "bad things happens when you reshuffle your deck" the moment you reshuffle, the villain gives you an *encounter card*. I avoid "Call for Aid" because i lost the game once because of that rule; i discarded half of my deck, got that "extra" encounter card right before the regular villain's move. — manuartero · 1 5/11/22
0

manuartero · 1
Yup. This is one of my favorite features of this card. I love using it to flip my deck for free to get extra Encounter CardsSl as Star-Lord when I have no Avenger allies in my deck! — Death by Chocolate · 3 5/12/22