Hero Action (attack): Exhaust Mjolnir → deal 8 damage to an enemy and return Mjolnir to your hand. This attack gains overkill. 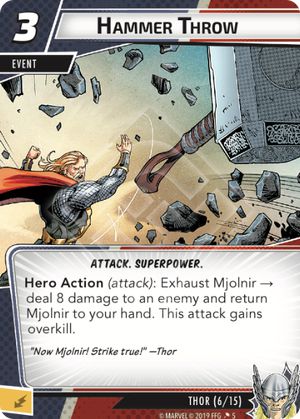 This is the card that makes Thor's deck powerful, and there are only 3 copies. I think realistically, unless you're playing MP you can maybe luckily send off 2 copies for 16 damage. Either way, turn 1 with Mjolnir you can do 11 damage turn 1. Or 14 if you're packing a Mean Swing. This is the card I mulligan for, not Lightning Strike, or any other card, I want to throw the hammer again and again. Sure other targets like God of Thunder will definitely help, but Hammer Throw will get you to the finish line. Having GoT in play is also key to returning your hammer without having/needing a card in hand, so keep that in mind.

John Cumberland · 389
Indeed, a good card that, and above its numbers, feels really satisfying and thematic to play. However, and probably is just me missing something, I see quite unlikely to hit for 14 HP in turn 1 using Mean Swing and Hammer Throw, since both require Exhausting Mjolnir. — ekalel · 1 7/26/20
2

Throwing the Mjolnir is how Thor will kick butts in solo games. Lightning Strike is pretty situational to be honest in solo, as there won't be so many enemies deployed at once. Luckily, the hammer is very easy to get to your hand when in alter ego form.

Compared to Swinging Web Kick, we gain overkill which gives 100% of those 8 damage most of the time. Flavor wise, it is also very satifying to throw the hammer and having it going back to our hand. And can be used for an extra resource if needed to top off a very explosive turn.

I like Thor. With every new pack I find we get cards that help him overcome his original weaknesses. Must have played a hundred games with the God of thunder.

And still, I've come to believe that Hammer Throw, his most iconic card, isn't as good as I first thought, sometimes even sub-par.

By comparison with other signature attacks, it's overpriced. I hear you say "8 dmg is equal to Swinging Web Kick and you get overkill!"

Pinpoint Strike does what Hammer Throw does for 4 cards (I won't count "being tiny" as an actual requirement).

I feel like a cost of 2 for Hammer Throw, or maybe a cost of 0 for Mjolnir would have been more fair.

neothechosen · 4484
Sorry, need to redo math 101! That's 1.33 dmg / card. — neothechosen · 4484 5/8/21
I think it's a little harsh to consider the cost to be 6 cards. Mjonir isn't being played only for the hammer throw, it's a card you likely would want in play anyway. The real downside is if you want to replay the mjonir afterwards you have to spend an extra resource to get it back out - making hammer throw have cost you 4 resources (5 cards). There is potential upside in hammer throw too though, if you don't intend on replaying the mjonir afterwards then you can spend it as a resource. In this scenario hammer throw only cost you 2 resources (3 cards). — L3w15 7 · 7669 5/9/21
This is a bit harsh. Mjonlir will probably already be on the table, and Mjonlir goes back into your hand making this only 5, not 4. — zephyr100 · 25 5/9/21
Agreed on what you guys said. And yes, maybe a bit harsh. Still, by comparison it has prerequisites that comparable attacks do not need to worry about. — neothechosen · 4484 5/9/21
Just re-played Thor, silver-aggro against Klaw expert. Hammer throw really shines... late game. Thor really needs a lot of resources generators to make it work. Once I was set up, however, every Hammer throw was played and felt great. Maybe I just expect Thor to be too much a "pu — neothechosen · 4484 5/10/21
Sry , i was saying, maybe I expect Thor to be a "pick up and play" like a lot of other heroes when he's really more complex. — neothechosen · 4484 5/10/21