Hero Interrupt: When your hero makes a basic attack, exhaust a Weapon upgrade on your hero → your hero gets +3 ATK for this attack. 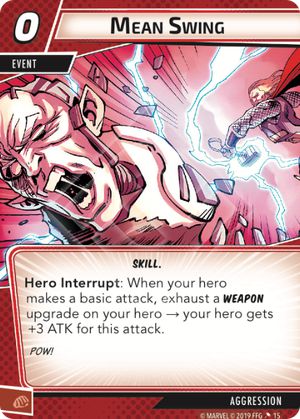 Aside from being an affordable and thematic card for Thor, Mean Swing is a great addition to Black Panther decks, as it can target both Energy Daggers and Panther Claws (which Wakanda Forever! doesn’t exhaust).

A word of caution, though: unlike its cousin Skilled Strike, this card does not stack with itself.

Skilled Strike can played “When your hero makes a basic attack”, and this condition is satisfied whether you are playing one, two or even three copies of this card.

Mean Swing can be played “When your hero makes a basic attack”, but each copy of this card also requires you to exhaust a Weapon upgrade on your hero.

In other words, if you draw three copies of Mean Swing during your turn, you need three weapons in play to make the best of it.