Hero form only. Attach to an enemy. Max 1 per enemy.

Forced Interrupt: When attached enemy would attack, discard Webbed Up instead. Then, stun that enemy. 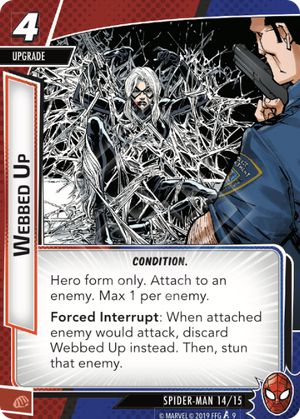 Q: How many attacks does Webbed Up prevent?

A: Two attacks in total. Webbed Up prevents the attached enemy’s very next attack by replacing that attack with the placement of a stun status card. Then, the stun status card will prevent that enemy’s following attack. -(Official FAQ)

Q: Does Webbed Up prevent Spider-Sense from triggering?

A: Yes. Webbed Up’s ability is a replacement effect (indicated by the word “instead”), meaning the attack never initiates. -(Official FAQ)

Getting two rounds without the enemy attacking you is a huge tempo swing in the hero's favor. The first time they attack it only removes this card and the second time you attack they remove the stun counter. Even if this was the only card you were able to play this turn you likely did something with your hero and maybe even made some progress with an ally. Then you still have the next two turns to play things out before they start swinging again. It's a brutal card that is worth the cost and lets you stay in your hero form for several turns without worry.

Bronze · 172
Ah, I hadn't seen that it's a 2rounder thing! I was wondering why it was so expensive :) — Jeckyll · 1 1/2/20
It won't actually last multiple rounds in any multiplayer game (unless all but one player is in alter-ego form), but in a 3 or 4 player game that actually makes it better -- if the current first player is such that two Heroes would be attacked before Spider-Man himself then you get the value of cancelling two attacks *and* still get the extra card off of Spider-Sense, which would normally be lost to the villain being unable to actually attack. — Thatwasademo · 1 3/4/20
3

Effectively 2 stuns for the true cost of 5 (printed 4 + the card itself). As best as I can tell, in the existing card pool, this is one of the least efficient ways to prevent enemy attacks.

If we assume that you usually get 1.5 damage / 1 cost, we can try to evaluate the stun-specific cost of other cards like Superhuman Strength and Heroic Strike.

Now, if we assume that an ally block and a stun are effectively the same (which they aren't exactly due to boost cards), we can pull in another data point like Mockingbird (who offers a stun AND a block).

Mockingbird - stun/block cost of 1 each

Going back to Webbed Up, it's clear that offering 2 stuns at a true cost of 5, or 2.5 cost per stun, is a poor trade off.

The final point to consider is that Webbed Up offers a NEGATIVE synergy with Spider-Man's Spider-Sense ability, by stopping the villain's attack before it is initiated.

**Edit: I was discussing with another player recently and they made the "negative synergy" point a lot more elegantly than I did:

diesel · 69
This review seems a little short-sighted to me. Remember- two stuns *isn't legal* any other way, and therefore Webbed Up is offering more value by virtue of breaking a rule. Resource analyses are helpful, especially when comparing similar cards, but in this case it's an incomplete analysis because nothing else in the game can *do* what Webbed Up does. — ImpossibleGerman · 10138 7/5/20
Thanks for the feedback. I agree that strictly a resource analysis doesn't provide a complete view on *any* card, but I think it is still relevant to Webbed Up. I'd also take slight issue with the statement that nothing else in the game can do what Webbed Up does. I agree that no other card specifically acts as two stuns, but I think Mockingbird is absolutely a fair comparison - in that it *does* prevent two attacks. And Mockingbird does so at a 1 cost discount. And you get the added value of attacking or thwarting twice. And she synergies better with Spider-Man's Spider-Sense ability by allowing the villain to initiate on you before she blocks the attack. Now we even have Iron Fist that - for the same cost as Webbed Up - can potentially prevent 3 attacks (2 stuns and 1 block) while dealing 6 damage. So, yes, maybe there's something to be said for having two stuns banked at the same time, but I still think the value proposition is extremely shaky at best. — diesel · 69 7/7/20
It’s an expensive card to be sure. Mockingbird and Iron Fist are also both S-Tier cards, to be fair. It would be nice if Webbed Up was as unequivocally strong as those cards, but it’s a bit of a moot point anyway- Spider-Man is forced to pack Webbed Up, so might as well make use of it! — ImpossibleGerman · 10138 7/8/20
Hero cards - on average - should be better than aspect cards, as they represent the unique powers the hero has in their arsenal. That being said, I think it's fair to compare any hero card to "S-Tier" aspect or basic cards - hero cards should at least be in that ballpark. And, while you can't choose to leave Webbed Up in the binder, I think a deep dive into the card can help players decide if the card is actually worth playing. — diesel · 69 7/10/20
Webbed Up is better than Mockingbird if the villain is already stunned. It is a bit expensive but last time I played Spiderman through all the scenarios I found it pretty useful. I especially like webbed up, stunned and confused villains. When I played Spiderman in the past I did find it much worse. I think Heroic Strike is very under costed (the stun is technically a kicker on STR but it's trivial), Mockingbird should have 2 HP. Superhuman strength does have real limitations being linked to a basic attack - it is hurt by stun and exhaustion plus sometimes surprise guard minions or tough which puts the cost of the stun at >2 IMO, and that is about the right price. — Pickles · 26 10/11/20
I agree with all of your analysis here. I just came to make my own review following the venom reveal. Further releases since this have further cemented webbed up as overcosted. Spiderwoman has pheromones which does 2 status effects for a cost of 2, quicksilver has speed cyclone which does 2 stun effects (one on a minion though) for a cost of 2, and the new venom card grasping tendrils effectively stuns twice for a cost of 2 as well. — L3w15 7 · 7657 4/6/21