Hero Action: Exhaust Plasma Pistol and remove 1 charge counter from it → deal 1 damage to an enemy. 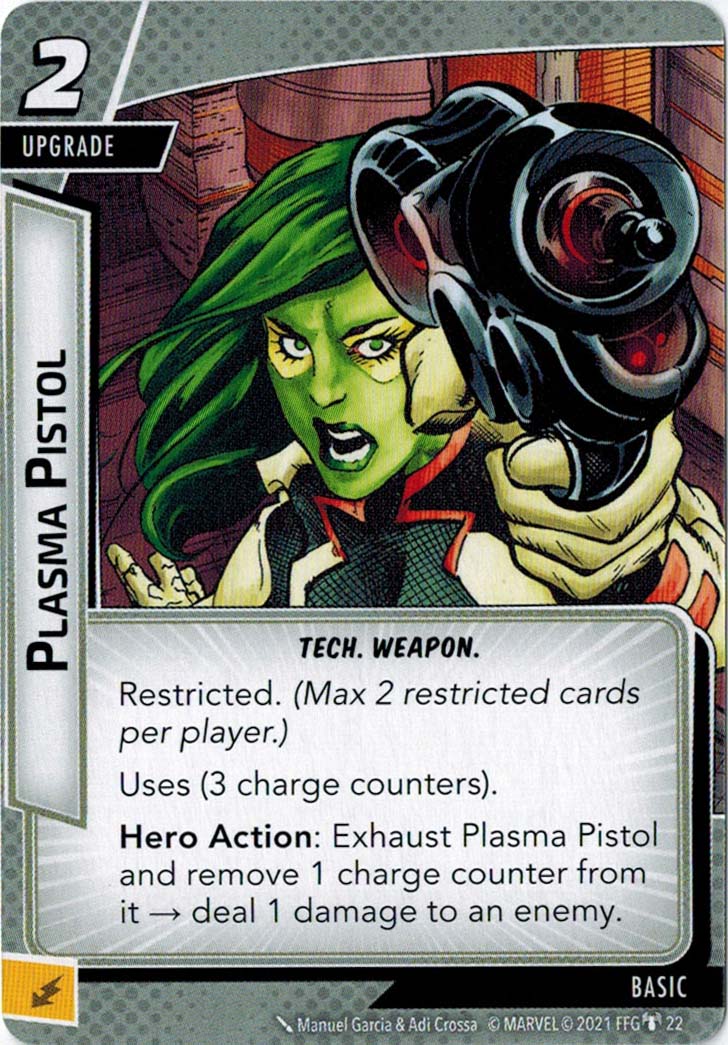 Attempting to value this card as "2 cost for 3 damage" (i.e. a Haymaker) shows a fundamental misunderstanding of Marvel Champions mechanics and valuation.

No, this isn't a "trash" card, it is a good (if situtational), low-cost way to have an on-demand, independent source of damage. A few folks have already mentioned its uses: plink off Tough, take out Ultron drones, or reduce Minion health for any number of card combos.

Do not underestimate that this card is Basic, so anyone can take it.

Do not underestimate that it remains on the table and is available as you need it.

Do not underestimate that you can utilize it when your Hero is exhausted.

Do not underestimate that as a Hero Action, you can use it on another player's turn.

Do not underestimate that you can use it even when your Hero is Stunned.

Do not underestimate that it a weapon and may be used with Mean Swing or Fusilade.

But no! It's a "trash" card because it does the same damage as a Haymaker over more turns. /s

Is it the best thing ever? No, but it is definitely useful and has its place for a number of specific Hero, Aspect, and Villain combinations. I think its biggest drawback is that it is Restricted, taking it off the table for most Heroes that come with Restricted weapons in their kit (Hawkeye's Bow, Mjollnir, Rocket's guns, etc).

Judicator82 · 82
It works well in a Venom deck too. His setup ability has the potential to discard a big portion of your deck if you get unlucky and can't find a weapon. Filling your deck with cheap weapon cards like this can help, and it might be why it was included in his precon deck. — erikw1984 · 3 3/6/22
Eh, I don't think you want Plasma Pistol for Venom. Once you're set up, you want to be using all three of his "hands" for his signature weapons, and I don't think Plasma Pistols are worth the cost of a Side Holster. Accelerating a turn or two towards cycling your deck is almost no cost at all, and even if your Setup dumps your entire deck and gives you an immediate encounter card, well, at least that means you are starting with Multi-Gun and both Venom's Pistols to start climbing out of that hole. — Fry · 142 3/7/22
Pretty much agree with the review and comments. It's the sort of card that acts almost like a "Preparation" you leave on the table rather than burn through it. — Vulkan · 8 9/30/22
4

I'm not going to write a full comprehensive review on this card; it's pretty awful. You're paying 3 resources for 3 damage over time, alternative to Haymaker. I guess the primary use is to pick off Tough with it and maybe a few other weird interactions. Almost all games recognize that damage over time needs to be higher than raw direct damage. I guess Plasma Pistol didn't get the memo.

With the exception of Iron Man; you're better off just running an Ally over this. Unless a 0 cost card released that doubled the charge counters on a weapon or attached to the weapon and doubled its damage, etc.; I don't see any driving motivation to ever run this.

RolandWright · 1867
Could be useful for mean swing, otherwise it's, as you said, unimpressive. — neothechosen · 7010 7/22/21
I'd defend this card as maybe having a role where you need weapons to key off other cards (e.g. Fusilade or Mean Swing). Except that it's Restricted. — adsarf · 201 7/22/21
Might be worth including in some Rocket decks since he can use his tinkering effect to get all but one effective card back. Also, having this in play helps him get the most out of his Schadenfreude. — jmmeye3@gmail.com · 14 8/14/21
It's a really good card on an Iron Man deck (Tech, energy resource, can ping away Tough before a heavy hit, also it's not an attack it won't trigger retaliate). — Capitan Viterbo · 155 10/1/21
Grenade is a better choice for Mean Swing — PanicMoon · 1 10/12/21
Re: Iron Man, Powered Gauntlets are Tech that can already pling tough away, so PP would be be dead weight for his deck. There are plenty of energy resource cards out there that it doesn't make sense to take bad cards just to get the energy resource. — RabidHobbit · 10 12/5/21
Is this a bad card? Sure. Thing is, Iron Man doesn't need "good cards" he needs tech cards. This is a way to give him tech in Justice, cheaper than Sonic Rife. Is Sonic Rifle a "better" card? Yes, but it's more expensive and once you flip to Hero, you're not really looking to flip to Alter Ego anymore, making Confusion much less valuable. — Erathis · 14 12/29/21