Hero Action (attack): Discard Pulse Grenade and choose an enemy → discard the top 2 cards of the encounter deck. Deal 1 damage to the chosen enemy for each boost icon discarded this way. 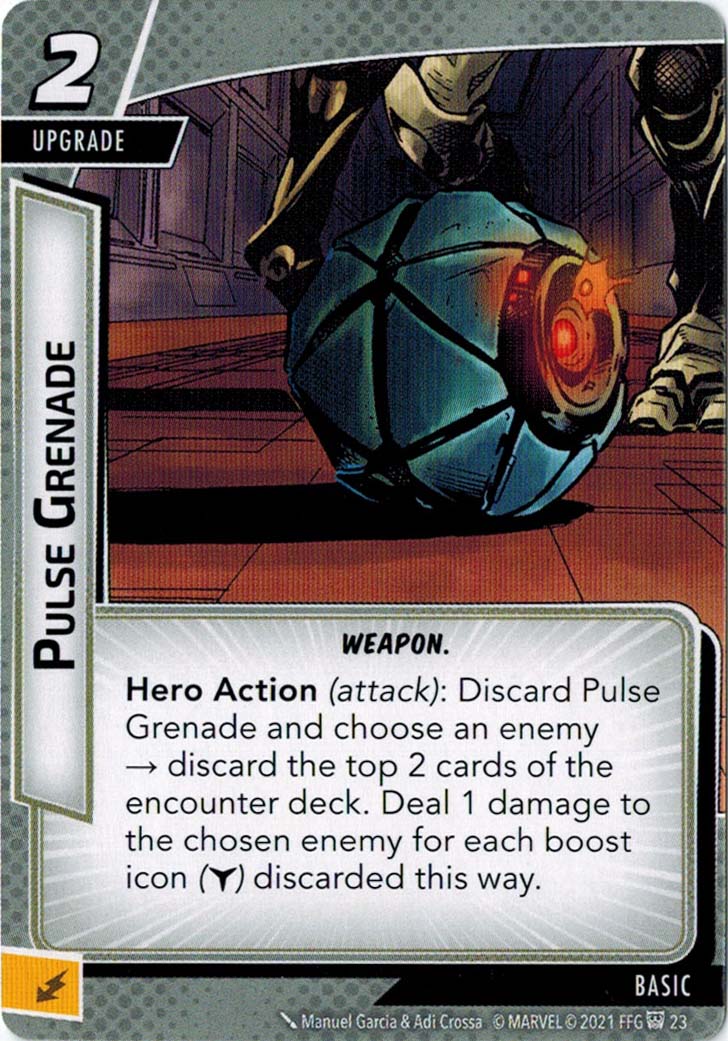 Looking forward to make this card valuable. My first thought is, put it into play, play Heimdall to rearrange the top of the encounter deck and then BOOM! Also, Scarlet Witch should be able to add a little magic to make things interesting...

neothechosen · 5513
This looks like binder fodder to me. Best case scenario, you're getting 3-5 damage for 3 cards. — Bastionfour · 2 5/17/21
Not wrong, and that's why I said "looking forward to making it valuable". Who knows what new cards to come might combine with it? On the bright side, in theory, it can already go as high as 6 dmg for 3 cards - 2 if you used the power in all of us to pay for it. That's better than uppercut, granted, less reliable. It also can be a target for mean swing. — neothechosen · 5513 5/17/21
I think it is also important to remember that the grenade can sit in play until it is needed, so you’re paying a premium for the delay until it is needed. — Death by Chocolate · 3 5/18/21
The sneaky good part of this is that it's a weapon upgrade that isn't restricted. So, any time a card says "exhaust a weapon upgrade", you can exhaust this. I use it conjunction with Fusillade for big turns for Hawkeye. — InigoMontoya · 2703 7/21/21
0

On average, you'll get about four damage out of Pulse Grenade, with a practical maximum of six. Haymaker is nearly unplayable with only three damage at this cost, but four damage is ok, and 5+ damage is up there with some of the better aspect and hero attacks. If you ever get 0-2 damage though, you're gonna feel real bad. There are some Weapon synergies (Fusillade, Mean Swing, etc) but those are fairly minor.

The big value though is that you get your damage on a delay. Most villains are significantly more threatening in their later phases, and/or summon a bunch of extra problems at phase transition. Setting down a grenade or two when you have things under control in an early phase will make your life better later. If you have all three in front of you, it's entirely possible you can just delete the last phase entirely - many villains have fewer than 20 hit points per player. Three grenades is an average of 12 damage, and possibly as much as 18; combine that with an attack from your hero and a played attack card, and you might well just win immediately.