Your hero gets +1 ATK. Your basic attacks gain piercing. (Discard any tough status cards from the target before dealing damage.) 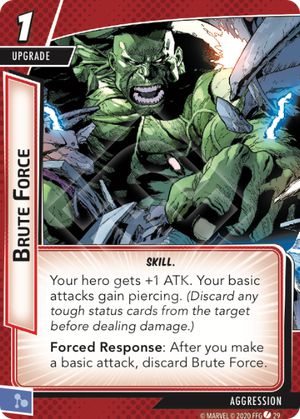 It is obvious from the art that this card was made specially for Hulk. Besides Hulk being stunned, Tough enemies is his biggest weakness. It is super depressing for the villain to get Tough just when you draw into a Hulk Smash. Thanks to Brute Force that problem is somewhat alleviated.

gustave154 · 8
That doesn't make much sense to me. Because of the forced response, this card will surely only be useful to heroes like Ms Marvel who rarely make basic attacks and can therefore keep the upgrade in play until it is needed. — adsarf · 82 2/14/21
Agreed! I used to include Piercing strike for such an occasion... I'd say Brute Force is somewhat limited because of the forced response... I'd like an upgrade that gives you some control over the moment you use it, or a permanent piercing upgrade! — neothechosen · 1849 2/15/21
I will add that this card also has some synergy with crushing blow. Crushing blow deals damage equal to your attack so will benefit from the attack buff but it isn't a basic attack so it won't cause it to be discarded. I think hulk is definitely a good hero to use this with, though I'm not convinced it's good enough even with this synergy. — L3w15 7 · 3235 2/16/21
@adsarf, I think it works out reasonably well either way. If you play it as Hulk you control the timing, so you have at least 2 turns for a tough card to come up before you have to "waste" the Brute Force. Meanwhile if you play it on someone like Ms Marvel, you're kind of wasting an exhaust when you do go to cash this in. — OrionJA · 4 2/21/21