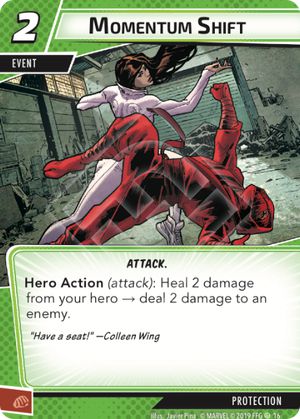 This is a nice card for any identity that prefers to stay in Hero form a majority of the game (like Captain America, Thor and to some extent, Black Panther and She-Hulk). Ms. Marvel also benefits from this card significantly, due to her ability to return an event to her hand.

Numerically, the card is okay:

Because of the attack element, this card loses the benefit of being used in Alter-Ego form (and on allies/other players) like First Aid and Second Wind. Identities that heavily rely on Alter-Ego form (most notably, Tony Stark, and to a lesser degree, Peter Parker) will probably benefit from this card the least.

Despite the numerical values of this card being average and unexciting, the card itself is pretty nifty. Being able to stay in the fight longer while also dealing poke damage is a plus. The problem with a card like Second Wind is that it can take up nearly your entire turn as a Hero with an effective cost of 4, while not really advancing the game state that much.

Momentum Shift can be used to knock-out Tough status cards, take out low health minions (especially those with Guard) or one-shot pests in scenarios like Ultron. It has good synergy with Captain America's Shield and Black Panther - their retaliate effects allow you to put this in the golden 3 damage zone that defeats a high number of minion cards in the game. It also works well with The Power of Protection. And with Energy Barrier you can stay Hero form much longer while also dealing damage.

Overall, it's an okay card. I think in a solo setting it will shine more than Second Wind. In tandem with preventative-counter cards like Energy Barrier (and kinda Counter-Punch), this card finds a pretty good groove and a "untouchable" kind of play-style.

I think Gamora loves this card? She heals, does two damage, and removes a threat from a scheme. Gotta love a card that does triple duty. It's not really an issue getting two damage on her and you can take a couple of attacks to get ready for it if need be.