Response: After Valkyrie enters play, deal 2 damage to a minion (3 damage instead if you paid for this card using a resource).

I am Valkyrie, shieldmaiden of Asgard.
Thor #12. 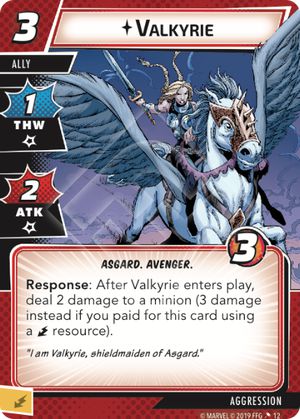 This is a fine card. I run Valkyrie in almost all of my aggression decks, largely because there's a limited pool of options, and because she's okay.

Numerically, I'll break down her values:

She's just okay. A lot of Hero-specific cards go above the 1 for 2 rule, but aspect cards generally don't. This card could be read as Pay 4; deal 8 damage (9 if you spent an energy) etc. but because it's an Ally, there are other benefits. Namely, if needed, she can Thwart - although poorly, and of course, body blocking with her final hit point.

Recursion effects like Rapid Response are also just "okay" with her. Valkyrie turns Rapid Response into a 3 cost, deal 6 (or 7) damage total. Which is better than cards like Uppercut

Synergistic effects like Steve Rogers or Avengers Assemble! are nice; but they aren't specifically intended to combo well with this card. If a hero/card releases that allows you to trigger an ally's "enter play" effects regularly (like on attack or something), that could be pretty good. Alternatively, a Hero/upgrade that causes all damage dealing abilities to deal 1 additional damage would incentivize including this in your deck.

All-in-all, I like Valkyrie. Her ability allows you to poke out Tough or low health minions and she's a good basic damage dealing ally for Aggression to have. Depending on how Marvel Champions evolves, I could see Valkyrie being played less and less.

RolandWright · 1628
I'm a little confused with this ally, and how it will interact with the Valkyrie hero. The unique rule reads: — wehehe · 102 12/1/21
(I wanted to add a braek line in the first post and I accidentally submitted it, As I was saying ) As I was saying, the unique rule reads: If a hero and a unique ally share the same title, but the alter-ego and the subtitle are different, they may coexist in deckbuilding and in play. So... Valkyrie hero has the Brunnhilde Alter-Ego, and Valkyrie ally has no subtitle... how it rules when it has no subtitle, it counts as being a different identity, so you can play both in the same deck, or as it has no subtitle at all, it only checks the title and as it has the same name, they can't ? — wehehe · 102 12/1/21
@wehehe I believe in this instance, you would be unable to include the Valkyrie ally in the Valkyrie deck. Additionally, I don't believe there's ever been another Valkyrie besides Brunnhilde in the comics (although I may be mistaken, ofc). — RolandWright · 1628 1/29/22
Barbara Norris, Samantha Parrington, Sian Bowen, Annabelle Riggs, and Jane Foster have all held the title of Valkyrie, but comic knowledge shouldn’t affect rules as not everyone has this knowledge. @rolandwright — Hodjimon · 13 2/5/22