Response: After you use one of Nova's basic powers (THW, ATK, or DEF), ready Supernova Helmet.

"You guys haven't heard of Nova? I beat up the Hulk! I'm a double-secret probationary Avenger!"
Joey Vasquez
Nova #1. Nova #. 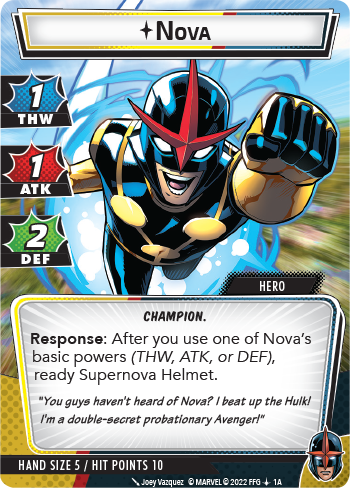 Alter-Ego Action: Spend 1 resource of any type → search your deck and discard pile for Supernova Helmet. Add it to your hand (put it into play instead if you paid for this ability using a resource). 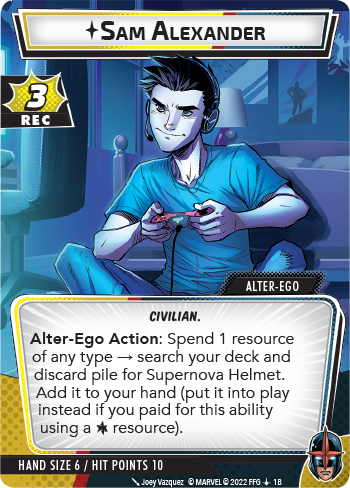 I seriously want to love this guy. His events are excellent, and with only a little preparation you can reliably have a double resource card or wild resource available to feed them. (two of his events will double a wild resource used to pay for them, meaning they effectively only cost a single resource)

The problem is...most of his events are only good, not great.

Which leaves him in this weird limbo, where you basically build a deck around the additional cards, and Nova's just along for the ride. Not that there aren't effective decks with this approach, I was just hoping Nova would synergize more with existing cards.

That said, I have high hopes for him moving forward, as he has a tremendous amount of wild resources available, and I think this will prove very beneficial in the future.

MacGhille · 174
I admit, the Wild resource thing doesn’t play into any archetypes well because the Helmet gives you all the Wild resources you need. But I think you missed the mark by not mentioning Unleash Nova Force. This is what your entire game plan as Nova is built around - setting up big unleash turns. Especially if you are using Nova in multiplayer…boy howdy! So I’d build Nova with ways to buff stats or minion/scheme finders in agg/justice, for example. — Stretch22 · 243 7/2/22
I see where you're going there, and you make a very good point. I did not acknowledge Unleash Nova force and the power of repeatedly readying and drawing cards. It’s a huge move…if you can make it happen. I'm just not a fan of cards that have triggered abilities that I can't really control. For example, the aggression ally Spider-Girl is an amazing card…unless there aren’t any minions in play. One By One is another example, where a specific condition must exist (the enemy only has 2 HP left) in order to get the most out of the card. My problem with these cards is that they tend to make players hold on to them, waiting for that ‘perfect moment’. And yes, it’s awesome when it happens, but random card decks are a numbers game. For me, that means I want to build around ideas and cards that rely on elements I can control, so that I am using my entire hand every round if possible. Which means relying on upgrades that I can choose to play, or flipping to different forms. What I don’t like about Nova force comes down to two issues. One, it’s worthless unless there are several minions in play. Two, the benefit of readying Nova isn’t very special, since he’s a 1/1/1 hero. No one is looking to Nova for his basic abilities without several other cards to buff him. Which means you’re playing Unleash in order to draw a card and ready his helmet for that single resource. For that to be meaningful, you need to have his signature events in hand which will treat that wild as two resources and even then, there are only three of them in the whole deck that deal damage during the hero turn (to keep the chain going). The card draw is great, but it’s a shuffled deck, so you need to have the attack events in hand already to be certain you can maximize what Unleash is capable of. So from my perspective, Unleash Nova Force uses a worldmind resource, then you attack a minion for 1, tap the helmet to play Pot Shot to finish them off, then ready Nova and the Helmet, attack and Pot Shot, ready Nova and the Helmet to attack and Pot Shot, and now you have three new cards, none of which are Pot Shot, so you have to hope that the final card from your original hand is an attack event or that you kept drawing attack events, but they’re def not going to be as cost efficient as Pot Shot…oy. That is a lot of pieces to have in place. If you draw into that scenario…*awesome*. Otherwise, the player is slowing their tempo down by being precious about one or two pieces of a combo as they wait through multiple weakened draws hoping to land that jackpot. Or, they could just get Honed Technique on the table, and play Dive Bomb. 11 damage to the villain and 5 to every minion. They literally just get all the same damage as Unleash Nova Force (plus 11 on the Villain) for playing a single card! No rolling the dice with diminished draws searching for that moment where Unleash Nova Force and three Pot Shots are in their hand (as well as several minions that are all 5HP or less). I think we’d all rather bank on the Dive Bomb/Honed technique, right?. — MacGhille · 174 7/4/22
What’s great about Unleash is that the floor and ceiling are both insanely high. The floor is replacing its resource cost with the drawn card and helmet ready. The ceiling is, as you described, something like draw 4-5 cards, 4-5 resources with helmet (not totally correct since they can’t combine for a single cost, but build around it with Jarnbjorn, Falcon for example), and 4-5 Nova activations (hopefully buffed by Combat Training/Heroic Intuition/Cloud 9/Morale Boost, etc). I don’t think Dive Bomb/Technique is a bad approach, but it’s not busted in the way Unleash often is (and is minions-only, not side schemes) — Stretch22 · 243 7/5/22
A big thing for Nova is that he gets to start the game with effectively two resource generators in play. That's huge from an economy standpoint. Most characters have to give up an entire turn to deploy two resource generators, and that's IF they draw them, and those generators may not be useful on 100% of turns. Sam spends 2 on his first turn (or less, if he has the Helmet or any other wild resource in his starting hand) and immediately refunds it. That's huge for getting a quick start, and generating long-term value. You do lose some of that value back over time, since his basic actions are quite bad, but it's hard to overstate how powerful Helmet is. — Fry · 142 7/9/22