Forced Response: After Blade thwarts or attacks, choose to either spend a resource from your hand or discard Blade. 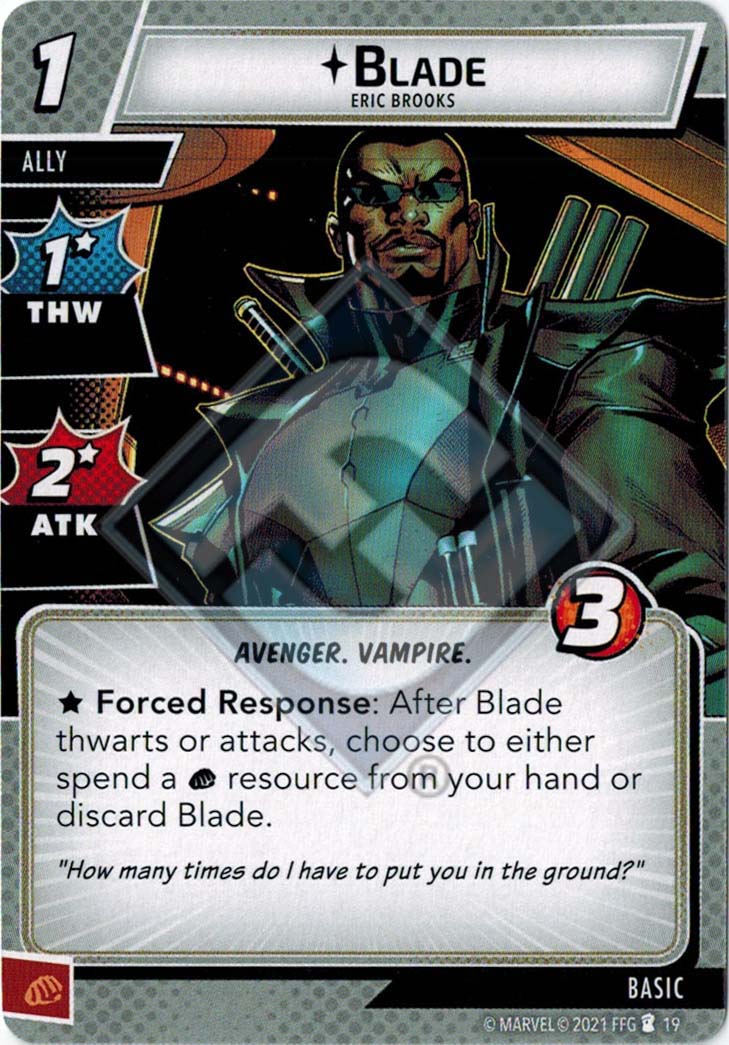 Imagine how cool it would've been if Blade was a Hero. Either way this card is pretty Good for Aggression and Soaking damage. I like the fact that it Replaces Consequential damage with a Payment method, making him feel more like a Hitman/Mercenary. If you've got 1 or 2 Cards you didn't want that has a fist resource than just buy him for one resource and just deal good damage on minions. He gets better if you're playing leadership Cause you can put some good upgrades on him (Reinforced Suit, Sidearm, and Inspired). If I could recommend Blade on two Hero's they would be Star-Lord, and Hulk, Star Lord because he can turn all his Allies to have the 'Guardian' trait which opens up to even more Upgrades (Laser Blaster, Guardians of the Galaxy, and Honorary Guardian). I would recommend Hulk because He has almost all of his cards being Fist resources. Overall I really like Blade, He's good, long lasting, And just a cool character overall.

MrEnricks · 11
And since Hulk has to discard down it helps with awkward hand costs. — wilyninja · 1 7/23/22
Reinforced Suit is an odd choice to equip on Blade; the whole upside to Blade is that he doesn't take consequential damage, so his HP is largely irrelevant. I guess you could try to tank an attack from the villain with 5 HP, but that's a pretty expensive gamble (2 cards + 2 resources) if you get unlucky. — Fry · 140 8/13/22
2

Blade is more powerful that it seems at first glance, I had to play it to really understand his power. In the worst case you are spending 1 card and 1 resource to block one villian attack or do 2 damage. That´s a decent trade and that´s only the worst case. In some games I use him to block minions attacks that deal only 1 damage. So you can get two blocks of 1 minion damage and 1 final block for the villian. In other games I attack a lot with him, some decks are good drawing cards and sometimes you have a in your hand that you can´t use anyway. With patience you can leave Blade on the table and use him to attack when you can, making him a constant damage dealer. One thing I really like is the avenger trait, that makes him free if you run a Team-Building Exercise or an Avengers Tower. What more do you want? I include Blade in almost every deck

Clintparker13 · 54
This is a great summary. Blade's flexibility is a big part of what makes him so powerful. Depending on your deck composition, he's essentially a Plan B that can also chump block. — Tzeentch144 · 7 12/2/22