Hero Interrupt: When you use one of Venom's basic powers, exhaust Venom's Pistol → Venom gets +1 to that power for this use. 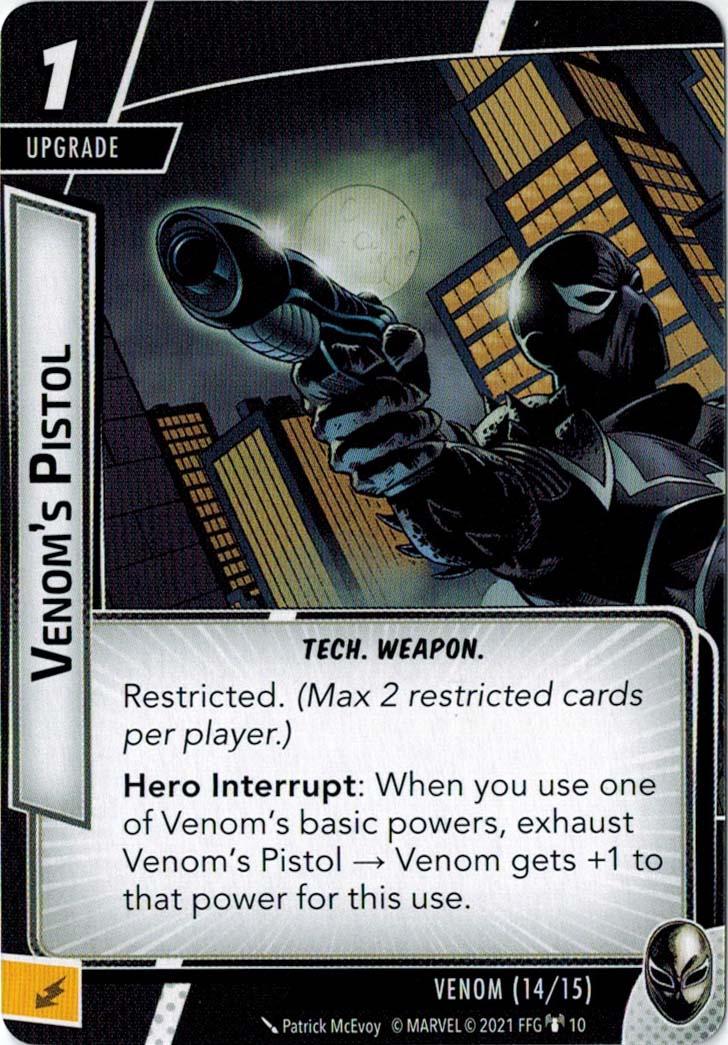 At first glance, this card seems like it might be better served as an upgrade that simply grants Venom +1 ATK, +1 THW, and +1 DEF. However, that notion becomes problematic when you factor in cards like Counter-Punch and True Grit — whose power levels scale with your hero's stat lines. Combat Training and Heroic Intuition are acceptable for these purposes because they permanently bump up one particular stat and require focus in deck-building — or playing with larger playgroups that run multiple copies of these cards which can be doled out to allied players.

Therein lies the beauty and flavor of this card. Flash Thompson excels at making split-second decisions — after all, his entire kit is built around versatility and the freedom to fulfill whatever role is desired or required at the time. He's a jack of all trades, but a master of none — and his pistols reflect that. They can be used in an instant to carry out whatever objective is at hand, but then they've served their purpose. With the exception of Run and Gun, whenever you're readying Venom, you're likely not readying his weapons as well. This introduces an element of strategy regarding how to utilize your pistols and demands that you take some time to consider the choices at hand.

I've been thoroughly satisfied with Venom overall, but I was pleasantly surprised to discover just how much of that satisfaction came from the flavor and thematic nature of his hero deck. He's a dynamic character in the Marvel universe and that versatility is reflected perfectly in his Marvel Champions deck thanks to cards like this.