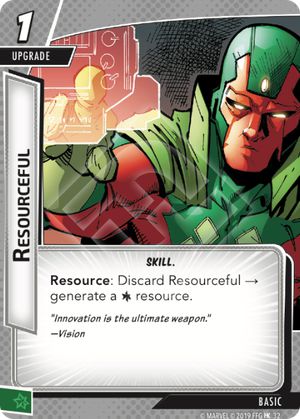 When this card was first revealed it was seemingly dismissed by most, even by Team Covenant during their deck building discussions.

While the Upgrade itself seems inefficient, this card's true value is overlooked: the Resource Icon is a wild, a rarity outside of "Power of [Aspect]!" and Signature Allies.

If you have a Hero build that requires specific resources to activate cards, this might be considered for inclusion.

An example is Iron Man. Thanks to Repulsor Blast, it is efficient to include a majority of Energy resource cards in your deck, while Rocket Boots require a Mental Resource. You could include this and always have a Mental resource to trigger Aerial.

Judicator82 · 82
I had not thought about that use for Iron Man. I usually run Enhanced Awareness to power my boots, but this card would be better. — Novawyrm · 147 10/22/20
This card doesn't work with Repulsor Blast because it doesn't have a PRINTED Energy resource. — LubosV · 1 10/27/20
I've played mostly Iron Man, and I can't see a game where I'd want to pay 2 resources just for a single activation of Rocket Boots. Any other printed science (or wild) card is twice as efficient at this role, as well as having additional value that you can build around. I guess if there are literally no cards with printed science that you would want, then you could include this. There is some uncommon change this card could save you from a "discard one upgrade" effect, but that means you aren't spending the resource, so it's not fulfilling its main role already. — RabidHobbit · 10 3/1/21
Add this to any Venom deck to set off his hero cards and there associated status cards — Daringhour7 · 65 9/4/21
Back when I wrote this (and today as well) I did not intend that you would play this from the table, but from hand. — Judicator82 · 82 2/7/22
1

I like this card for Venom. When building decks for Venom, I have trouble balancing the various resources you will need to fully fire his events. Adding this card helps in two respects. One, you can use it during your current turn for whatever you need. Second, it can be used to save for a later turn. Very beneficial for those turn when you have extra cards with nothing productive to do with them. I have even used Venom's special ability to pay for this card to be used for later. Good card when you need access to multiple resources for various cards. May be a useful card for the upcoming Nova hero pack.