Hero Action: Give your hero a tough status card. 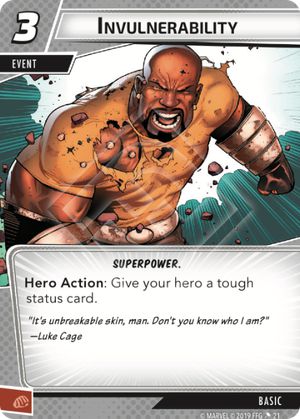 Unfortunately, this card in my opinion is horribly overpriced.

What do you want to get from it: negate next attack.

Baring some exceptions (Rhino with Charge or Bulldozer) you can use ally with 1 hp to do just the same, except an ally will do something before that - Mockingbird will stun the enemy and thwart/deal damage (for the same price), Nick Fury costs 1 more but will give you back most of his cost, the list goes on and on, but in my opinion, the more cost 3 or less allies we get, the even worse this card will become.

TL;DR: if you think of using it, don't, flood your deck with cheap allies instead

Aatxe · 4
I have to ag — Southy · 285 3/9/20
Ignore last comment, site messed up. I have to agree though. Negating one attack is not much. I wouldn't even run this in my Cap Protection deck, just run 3 copies of Expert Defense. — Southy · 285 3/9/20
I run this in a Black Panther aggression deck that already has all the cheap allies and still wants more of the effect. The physical resource is the main draw, mostly because I can't stand Honorary Avenger. Yet it also lets you stay on the offence for longer in exactly the same way that allies do; the retaliate is only 1 point but its about what you'd get out of Mockingbird. So yeah, this is an example of cards being actually better in practise than game theory suggests. — The_Wall · 5 3/10/20
One of the worst cards in the game, by far. With some exceptions; you could play a cheap ally to get the same result if not better (because it might have an effect and it gets to THW/ATK first). I honestly hate this card. — RolandWright · 806 6/4/20