Hero Interrupt: When you play an Attack event, exhaust Embiggen! → increase the amount of damage that event deals by 2. 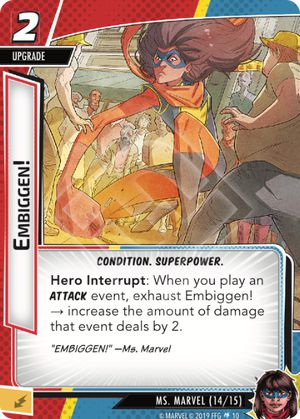 Q: If an Attack event deals multiple sources of damage (such as the Aggression event, Melee), how does Embiggen work?

I am confused about how Ms. Marvel's embiggen interacts with the leadership card All For One from Wasp's pack. If I add the 2 damage from embiggen to each instance of damage, would I be dealing 3 extra damage for each avenger exhausted or simply x+2 damage where x is the number of Avengers I exhaust?

Because if I simply add 2 to the printed numbers, then the card reads "Deal 5 damage to an enemy and exhaust any number of AVENGER  characters you control. Deal 3 additional damage to that enemy for each character exhausted this way." It just seems unclear whether each exhausted Avenger is a separate instance of damage or one combined instance of damage for all of them.

I often hear people call Ms. Marvel bad with leadership, but a deck archetype around cheap/efficient thwarting avengers and recurring All for One seems pretty solid even if the text is interpreted as the weaker of the two options.

DummyQt · 1
From a reddit post asking the same question, citing the rules reference, "The word 'additional' denotes a modifier to an ability or game state. The additional modifier is resolved simultaneously with any ability it is modifying." So All For One sees you exhausting 2 allies, for example, and becomes a single instance of 5 damage. Embiggen would add 2 to make it 7. Sadly not as busted as you wish — Stretch22 · 231 6/17/22