Hero Interrupt (defense): When you would take any amount of damage, prevent 3 of that damage. Draw 1 card. 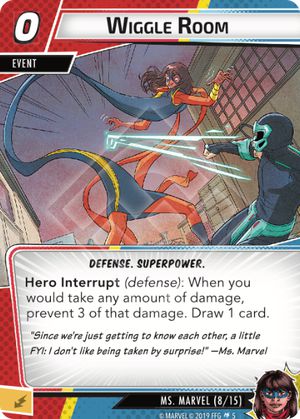 Q: Does playing Wiggle Room count as a defending an attack? Example, will Wrecker gain bonus ATK from the attack being undefended?

Q: Does playing Wiggle Room count as a defending an attack? Example, will Wrecker gain bonus ATK from the attack being undefended?

Ms. Marvel is very resilient in any aspect thanks to this card, which she can trigger with Morphogenetics in the case of an Assault or Gang-Up. Her very high REC value makes her one of the few 10 HP heroes who can facetank a Charge and bounce back for more thanks to this event.

The FAQ on this card is out of date. FFG changed the ruling, now using an event with the defense trait event DOES count as defending. The updated Rules Reference Guide was published on FFG's website, but has since been removed, you can view it on Hall of Heroes here: hallofheroeslcg.com

MyLtlePwny · 21
This is, technically and awkwardly, not true. Wiggle Room DOES count as a defending per the new RRG, but NOT because it has the Defense trait. Traits are defined as the bold and italicized words just under the art and, by definition, have no inherent effect on game rules. The reason why Wiggle Room counts as Defending is because the ability text itself is ‘labeled’ with “(defense)”. The same is true for attacks and thwarts. The traits don’t make them count as attacking or thwarting - only the labels. — Death by Chocolate · 1 5/7/21