"Sometimes being a gentleman means holding the door, and the rest of the building."
The Rise of Red Skull #13. 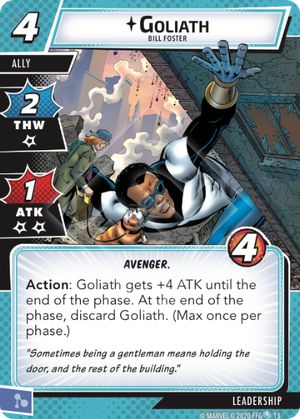 Bill Foster is great. The trick is, you usually don't want to block with him; that's ok, you're playing Leadership, you have plenty of other allies to block. Generally you'll want to thwart three times, then embiggen and attack, for a total of 6 threat removed and five damage. Excellent value for 4+card! If you have access to a readying effect (Command Team, Get Ready), you also have the option to thwart once, then embiggen and attack twice in the same turn, which is also very efficient, and can help close out a villain quickly.

A good Ally for a Sneak Attack deck, too.