You may play Arrow events attached to this card as if they were in your hand.

Hero Action: Exhaust Hawkeye's Quiver → search the top 5 cards of your deck for an Arrow event and attach it faceup to this card. 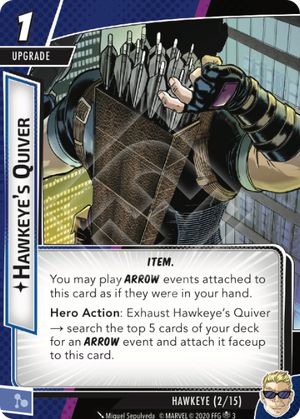 Q: After I search the top 5 cards. Do I shuffle any cards did not choose back into my deck?

A: Yes. Anytime you "Search", you always shuffle. -(Developer Ruling)

So…in the past, I made a mistake. I said before that no, you do not shuffle. But Caleb and I have talked very recently. And we decided that anytime you search, you always shuffle. We will update the rules reference eventually…to make it that you always shuffle. – Boggs

One really cool thing about this card is that unlike Jessica Drew's Apartment, it doesn't make you shuffle your deck afterwards. Once Hawkeye has this in play, he'll always know what he's getting from Avengers Mansion or Press the Advantage, which can be a big help in turn planning, and he'll also have a good deal of information about his upcoming hand.

This potentially makes it much easier for Hawkeye to take advantage of the various events that are meant to be played during the villain phase. Foiled! is an incredibly efficient card if you happen to be in alter-ego when you draw it, but sometimes it's too risky to flip to your alter-ego if you don't know whether you'll draw it. If you stay hero and do draw it, then holding it in your hand for an extra turn effectively doubles its cost. Fortunately, with Hawkeye's Quiver you can stay in hero form until you know you're about to draw Foiled!, and time your flips accordingly.