Your hero gets +1 ATK and each of your Arrow attacks gain ranged. 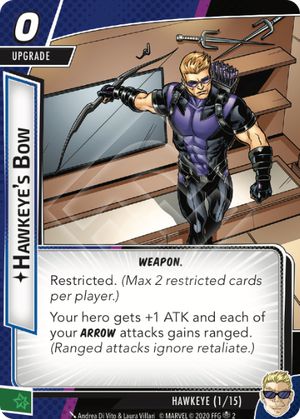 Hawkeye's bow is a good card, but also kind of an overengineered one in the wider sense of complicating things within Hawkeye's signature cardpool. Other heroes like Thor and Captain America also have signature weapons as well as cards that require them, but in Hawkeye's signature cardpool it is a whopping ten cards that do absolutely nothing unless you have the bow at hand. For that reason, the Wild resource printed on this card is a bit of a joke, as discarding this card for the resource is a patently absurd idea. Exhausting the Bow to play Arrow Events is also slightly annoying as through resource costs, playing two arrow events in one turn is already unlikely, though they are somewhat efficiently costed.

Usually your first turn with Hawkeye will be grabbing and setting up your bow as it is a quintessential component of your deck, almost an extension of your identity. Giving your Arrow events ranged is nice and saves space on the arrow cards themselves.

The somewhat underappreciated part of this card is the +1 ATK, boosting Hawkeye to an almost natural 3 ATK which is on par with Hulk without the downsides of that identity. It also makes him a prime candidate to use cards that scale with ATK such as Quick Strike and Smash the Problem.