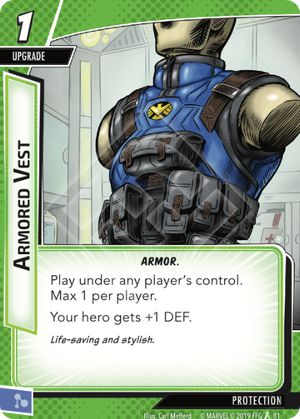 It is hard to overstate how excellent this card is. One resource, and you get +1 DEF for the rest of the game. Considering how weak the DEF stat is for so many heroes, I a have to believe this is an automatic 'include' for any deck with a Protection aspect.

Armored Vest is an interesting Upgrade that is very different than it's Core Set counterparts of Combat Training and Heroic Intuition. Every Hero ATKs at some point, even Ms. Marvel with her one ATK, Every Hero with a THW of 2 is actively Thwarting. Adding those Upgrades helps many actions throughout the game; most Heroes benefit from Combat Training and Heroic Intuition.

Armored Vest is very different, as very few Heroes plan on actively defending. It is an absolute requirement for Defender builds (actively defending every turn, inlcuding readying cards and upgrades that trigger while defending). There are a number of Protection cards that reduce damage without having to actively defend (Defiance, Subdue, Deflection, Sidestep), freeing up your Hero to use their ATK or THW next turn. Non-Protection Heroes these days play Allies or duck to Alter-Ego to avoid damage, rarely defending more than a couple times a game.

Deecklists are getting so tight these days that I am having a hard time including Armored Vests for non-Defenders, and even harder to include an extra to put on another Hero.

I rate this card:

Non-Defenders: C - potentially effective in niche builds or with the right Hero

Defenders: S - Should be included in every deck