Hero Interrupt: When a treachery card is revealed from the encounter deck, cancel its "When Revealed" effects. The villain attacks you instead. 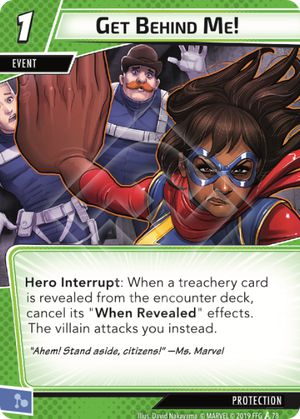 I usually don't mind using suboptimal cards, but this card is just so weirdly awful that I can't bear to use it, I just prefer to imagine it does not exist.

This card is a vastly inferior version of enhanced spider sense. So in order for this card to be decent, enhanced spider sense would have to be an awesome card. But I have played with that card a lot and while it is certainly useful, it isn't really “awesome”. The problem is that very often you do not draw a treachery card, and even if you do, a lot of treachery cards aren't that impressive and are not worth the cost of cancelling (mainly because the cost of playing enhanced spider sense can easily prevent you from playing something a lot more important). So how often would you want to play a card that, in essence, doesn't even cancel the treachery, it just changes it to a different treachery. It is occasionally great for preventing something like Shadow of the Past, but that just isn't great enough to be worth using a card with such a terrible disadvantage.

The idea with this card seems to be that sometimes a protection character can become so well protected from damage that you really don't even care if you get attacked, or possibly you even have the cards to benefit from it. So in that case you might find the disadvantage of getting attacked to be trivial, and if it is trivial the card might be worth using. However, I think that once you get into a situation where enemy attacks are of no threat to you, there's a good chance it is because you have reached a position where you are solidly winning the game. And you don't really need to put cards in your deck that mostly only help you when you are already winning the game.

cnalexander · 105
Spidey can draw a card. With Defensive Stance or Indomitable, the attack can be mitigated, but still: too much work for 1 card. — zephyr100 · 25 1/4/21
I have to disagree here, there are some really annoying treachery cards and for the aspect that just wants to sit in hero form anyway, this are great to sit on and say "No, I'd rather not deal with some shadows from my past". Get Behind Me even replaces itself on Spider-Man by drawing you another card. And while I may agree that there are often not targets for it in Single Player, I assure you there are plenty that get revealed in 3-4 player (which is where these cards really start to shine). — drchook · 257 2/9/21
1

So the initial review of this card did not age too well. Not only were they comparing an aspect card to Hero deck cards, which really shouldn't be done in terms where you consider them equals, treacheries have gotten much nastier with some of the scenarios, and there are plenty of villains where the average attack isn't as bad as the treachery in their default Villain deck. There are also treacheries that scale with player count, such a Concussive Blast, where an attack from Zola (for instance) will do far less damage to your team then a board blasting AoE.

Get Behind Me is a card that allows you to essentially transition the effects of a treachery and turn it into an attack. The question to include this card is whether or not your hero (or team) would rather deal with an attack instead.

Heroes who should be looking into using this card are ones that get inherent benefits from attacks initiated against them (Such as Spider-man, Venom, or Drax) ones that can transition those attacks into damage with things like retaliate (such as Black Panther, Captain America, or anyone using Energy Barriers) or those who consistently flip down to heal or have damage mitigation inherent to their character (Ms. Marvel, Vision, Wasp). In addition, heroes using card like Never Back Down can combo with this card since the Villain may already be stunned and you won't be taking the attack anyway.

This is not always the best option depending on the on treachery, but an attack is often better then losing your Shield from a Caught off Guard if you are Captain America for instance. It can also be used to pull more heat in your direction after you have feet planted, so even faster set-up characters playing with slower set-up characters could consider using this card.

Other then the obvious downside of taking an attack on, it should also be considered that this card is going to cause you to churn through the Villain deck faster. Characters such as Scarlet Witch (or those playing with her) should consider the possible impact to Acceleration tokens. While this may not seem to matter most of the time, when too many factors come into play where you say "this doesn't matter" they can add up into something that does. You are also going to possibly suffer the effects of a boost ability that is just as bad as the treachery itself. Not every treachery card is worth cancelling, and not every attack is worth taking.

While this card can be a valuable asset to your game and deck, it always need to be view as a tool and option. It's never a for sure go to card, even for someone like Drax, but can shift a game getting out of your control into one that is now managable if used correctly.

Earth Dragon · 1240
I would also add that since this game came out, we have gotten lots more ways to have tough cards, cheap allies, and stun effects that make the attack less threatening. Sometimes in a Muster Courage deck, it can be hard use up all the toughs on blocking before you are ready to play another one. — Stretch22 · 243 2/6/22
I still think spending 2 (the card and a resource) for the privilege of taking an attack instead of a treachery card is a bit much. Not a card I could see myself running in multiples, but I could include it as a single in some of the mentioned heroes. Better with large numbers of players, so you're more likely to see treachery cards bad enough to warrant using this, on the turns you happen to have it in hand. — Fry · 142 2/18/22