What If... Vision had destroyed the Avengers? (Updated) 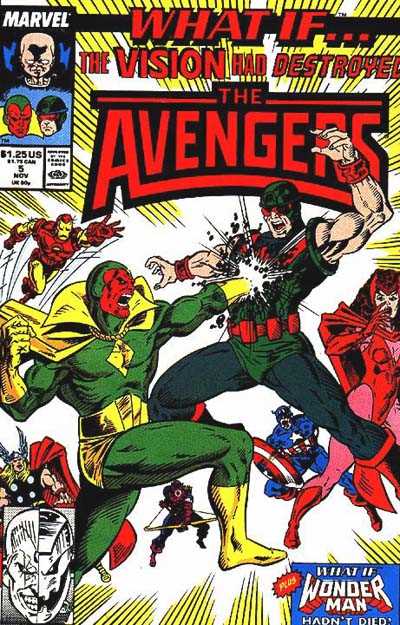 "I am The Watcher. I am your guide through these vast new realities. Follow me, and dare to face the unknown, and ponder the question: What If… the VISION had destroyed The Avengers?"

Welcome to the first What If...? themed deck I have made. The goal is for these decks to explore a fun theme while still staying relevant and useful. Today we explore a reality where Vision turned on his fellow Avengers.

For the above to work properly so that Vision can unleash destruction; [Solar Gem](/card/26005) is a top priority. I will usually mulligan my entire hand to grab this upgrade. With aerial, it allows Vision to play [Dive Bomb](/card/17028) and the it produces can make sure you always trigger [Honed Technique](/card/28017). Your priority is to get this on the battlefield followed by [Honed Technique](/card/28017) and after, choose which Avenger to kill and blast away.

Am I mad for including [Energy](/card/01088), [Genius](/card/01089), [Strength](/card/01090), and both [The Power of Aggression](/card/01055)? Yes I am. So is Vision for killing The Avengers. These cards are useful for paying the exorbitant cost of [Solar Beam](/card/26008) and [Dive Bomb](/card/17028). I also included [Deft Focus](/card/16024) and [Martial Prowess](/card/10018) to give Vision a steady flow of resources. [Reboot](/card/26024) is a must have for Vision as it allows him to heal and I found myself using his refresh to thwart, allowing him to take a break from being a killing machine. [Ready to Rumble](/card/21022) is a nice upgrade to have as it pairs well with his form change. Often I would change to [Intangible](/card/26002) for Defense and switch to Dense when a good hand appeared to dish out the damage. [Endurance](/card/05023) gives Vision a nice boost to hit points (killing machines shouldn’t be easy to kill themselves) and [Assault Training](/card/26033) allows for [Dive Bomb](/card/17028) to be recycled into the deck or used for an . The last two cards, [Fluid Motion](/card/28016) and [Combat Training](/card/01057) are for when Vision needs to chip away at the villain or hit a minion with a basic attack. I’m not tied down to these two cards and could see them being switched out with others. I still used [616 Hickory Branch Lane](/card/26004) with [Vivian](/card/26003) but mostly for the THW and to block when necessary. This version of Vision is focused on destruction instead of a picture perfect family.

Because this Vision destroyed the Avengers (have I mentioned that enough?) no extra allies are present in his deck. That does make defending and sometimes thwarting a challenge. If you are able to blast down the enemy quick enough it doesn’t become that big of an issue. However, just keep an eye out on the growing pile of threat.

After disintegrating the Avengers into ash, Vision easily vaporized both Expert [Klaw](/card/01113) and Expert [Kang (The Conqueror)](/card/11001) when they dared attempt to challenge him. He is now turning his gaze on acquiring all the infinity stones... Comment below if you tried this vast new reality and stay tuned for another themed deck that asks the question…
WHAT IF...?