Hero Interrupt (defense): When the villain initiates an attack against you, cancel that attack. If you paid for this card using only resources, stun the villain. 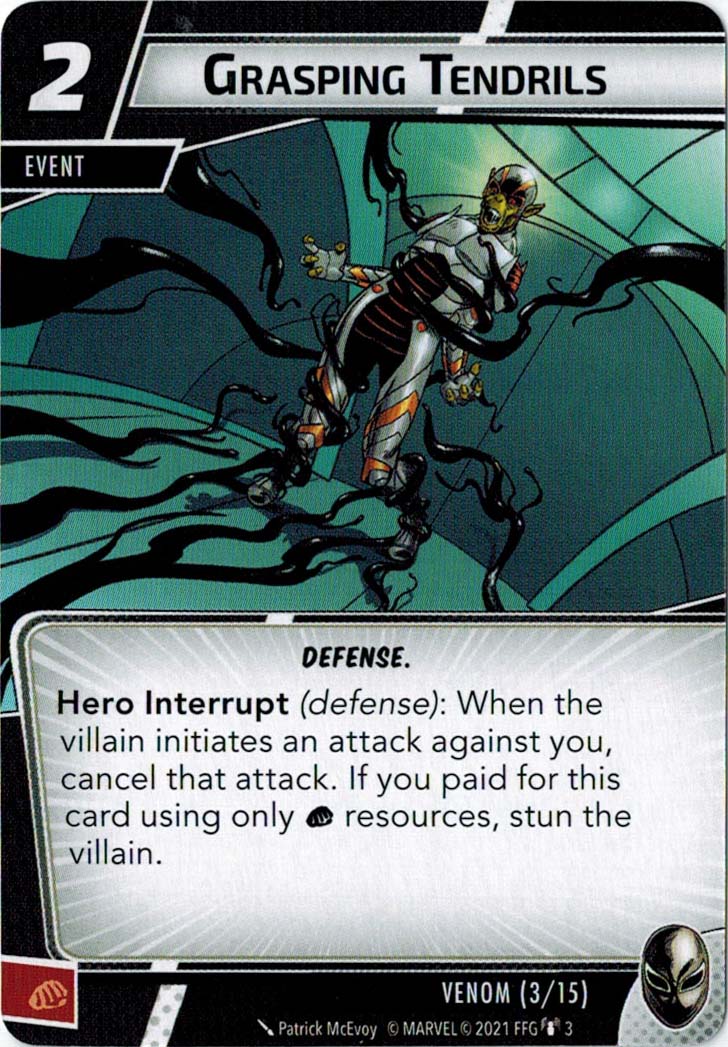 Am I the only one particularly annoyed that you can play Behind enemy lines with sense of justice, but this and savage attack seem to have their needed resource reversed when looking at Nerves of steel and martial prowess ?

Apart from that, amazing card. Prevent 2 attacks for 2 resources is amazing. Have an hellicarrier out and use venom's power to bypass the requirement for specific resources on any Venom's event, and you're golden.

Galdanor · 3
Unfortunately I don't think helicarrier can be used during the villain phase because it's an action. I've been using one enhanced physique in my decks (outside aggression which has lots of strength resources). — itsevaaan · 1 7/29/21
Have to say, this is the most infuriating card in the Venom pack for me. Precisely because the designers made the follow-on effect so infuriatingly difficult to use. Venom himself has precisely three cards that generate a strength resource...two copies of this exact card and a permanent (Project Rebirth). Which means you *really* have to design a deck around strength resources to make the most of this card. Which means the Justice (my personal favorite aspect for this hero) is largely a bust. If you want to get the 'webbed up' effect from this card, you're probably going to need to go with aggression for the near future. — MacGhille · 153 7/18/22
0

Cancelling the attack actually makes this card a mixed blessing with the protection aspect as cards like unflappable/electrostatic armour/hard to ignore/flow like water won't get a chance to occur. Spider-Sense now makes a lot more sense as you draw the card when the villain initiates the attack. Still a crazy good card.