Hero Response (attack): After a minion engages you, discard Lie in Wait → deal 3 damage to that minion. 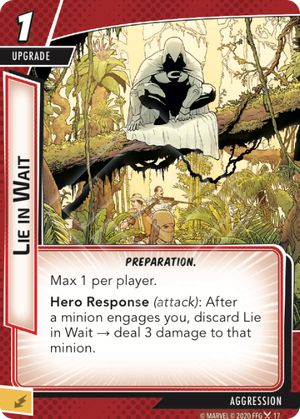 At 1.5 dmg/card spent, this is generally below rate for an attack. The proactive nature of the card is a plus and a minus. On the one hand, you get to play it even if there is no minion target in play (whereas something like Relentless Assault or Into the Fray becomes a dead card in this scenario), but on the other hand, it can't be used to attack something that's already hit the board. This makes it pretty weak overall and I would seek an alternative like Surprise Attack or Press the Advantage.

If this produced a resource, this could be justified in a Jarnbjorn or Hulk deck, but sadly does not have much use in Aggression.

Black Widow is currently the only hero for whom preparations matter, so 1 copy could be justified with her, but I think I'd almost always play Widow's Bite instead if given the chance.

Several decks these days attempt to play loads of upgrades to thin the deck so that it cycles through a select few events more quickly. As a cheap upgrade, Lie in Wait could fit the bill for those decks.

Lastly, this could be tech against certain scenarios with quickstrike minions as it can kill them before they attack you (if in hero mode). Trigger this on a Berserk Mutate and you will be very happy.

Stretch22 · 52
The lightning symbol could find this a home in a Captain Marvel or Iron Man Aggression list (especially with an Aggression Tech card on the horizon). — 4649matt · 8 3/12/21
Great point - I forgot about heros that could care about energy. Definitely playable enough in those — Stretch22 · 52 3/12/21