Play only if you control a Spy character.

Interrupt: When the surge keyword on an encounter card would be resolved, discard Espionage → draw 2 cards. 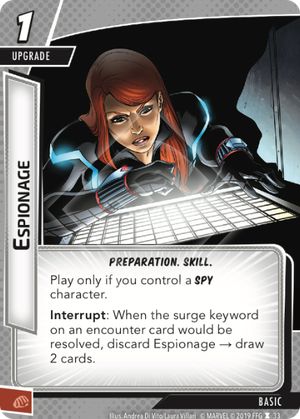 I think this is a fun little card. Have an extra resource to spend? Or your Black Widow's Gauntlet has nothing to do for a turn? Spend a point here and put this on your board. The next time you get a surge out of the encounter deck you get a nice little bonus out of it.

bwridge · 4
The problem with it is that you're spending 2 cards now (Espionage itself and whatever paid for it) to get 2 cards later, at a point you can't really control. That slot is much better spent on something a lot less slow. — ecamel · 11 8/17/20
From a pure cost point of view, you have a point. I reserve this card to put in my deck when I know a lot of surges are in the villain deck like Expert/MODOK. The surges are beyond your control too, so what you're paying for is an opportunity to get two cards into your hand to deal with the extra actions the villains is getting through surge and guarantee you can pay for whatever needs to get done compared to a normal hand. It's not an auto include in every deck. It does come in handy. — DoxaLogos · 162 8/22/20
I think for non-black-widow decks I'd rather run with Resourceful these days. — OrionJA · 7 8/25/20
If you are running BW deck it isn't JUST draw two cards. If you have the Synth-Suit down getting a surge on ANY PLAYERS encounter cards = 2 cards, 1 damage dealt and ready BW. That is GREAT VALUE plus they stack! I have had a turn where a surge came up I discarded all three Espionages, gained 6 cards into my hand, dealt 3 damage and readied BW. That is INSANE value for a card that can by paid for by just using one of her gauntlets. — Novawyrm · 147 10/22/20
I think Espionage is an automatic 3-of in Black Widow, and a potential inclusion in any deck with Coulson or a spy Hero. Tempo is weird, and big turns are important. Having a 4-resource turn now can be well worth an 8-resource turn later. — Blackhaven · 2 10/22/22