Interrupt: When any amount of threat would be placed on the main scheme, discard Counterintelligence → prevent 3 of that threat. 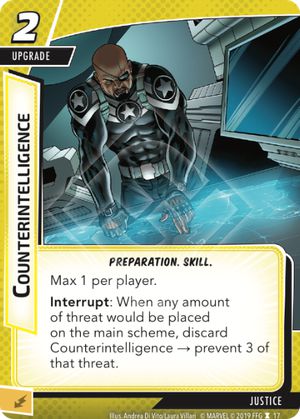 This is an incredibly powerful card. Playing two-handed, this allows one character to go to alter-ego and heal up, even in scenarios with low max threat, like Ultron’s Stage 1, The Crimson Cowl.

It also completely stops any Encounter Card that schemes, like Advance (from Standard).

Definitely you can use this to substitute Under Surveillance.

This card is fairly mediocre but usable. Basically, it has the option of either being an inferior version of Under Surveillance, or an inferior version of a thwart card like For Justice. It only stops 3 threat instead of 4 as the other cards do. In addition, if you want to leave it in play and use it like Under Surveillance it is awkward that it has to prevent 3 threat all at once, where Under Surveillance works fine against threat being placed one point at a time. And compared to For Justice it is really hurt by only working on the main scheme, though it has the benefit that you can play it ahead of time and hold it until needed.

I think the main use of this card is that it is a Preparation and thus works in combo with characters like Black Widow or Agent Coulson. Another use might be for a character who expects to thwart the main scheme down to zero threat every single round, and wants to play this on turns where they are dominating the main scheme in order to save it for a later turn where the luck is against them and they need the extra thwart. Another use might be that Under Surveillance can sometimes be an amazingly great card, but you are limited to playing one, so you might feel that a second Under Surveillance, even if it is an inferior version, is still pretty great.