Hero Response: After you trigger the ability of a Preparation card you control, exhaust Synth-Suit → ready Black Widow. 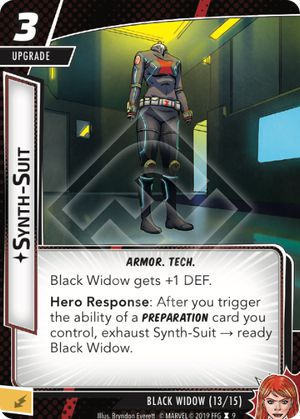 What an interesting card.

This is makes Widow one of five heroes that have a +1 DEF in their hero deck. (I you are interested, the others are Quicksilver, Valkyrie, Captain America and Captain Marvel) And of those five, she is one of two who start with 2 DEF.

This means that in the Protection aspect, Widow is among a rare few who can be a 4 DEF, which is huge. She can walk away unscathed or with a single damage from a vast majority of hits. Plus with Synth-Suit she can ready herself if you are able to trigger a preparation card during the villain's phase and defend again. This should be pretty straightforward since her entire build is directed at preparation cards, and many of them are responses to villain actions.