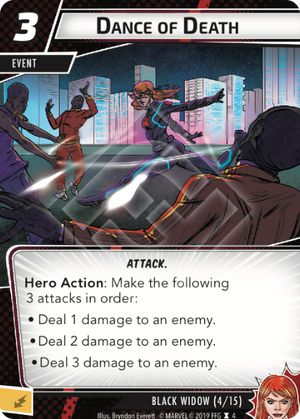 Just came to my mind that Widow with Jarnbjorn might be fun. It will cost you 6 resources and a card, but you'll be able to trigger Jarnbjorn three times from this event. And potentially attack normally and use jarnbjorn 4th time.

picollo · 76
If Black Widow is Stunned, does that prevent the entire card, or just the first attack? The card says "3 attacks", so my guess is that it only blocks the first one (the 2 damage attache and 3 damage attack still trigger). Has FFG confirmed this? — MyLtlePwny · 45 4/9/20
It prevents the entire card since the card is an attack. You would play Dance of Death and then unstun. — GenArt · 1 4/23/20
Are you sure about this ? The card clearly states that this is 3 attacks. I think you discard your stun card after the first attacks. It will surely be in the next FAQ, but that is the way I see it. — Baker · 1 4/30/20
Only the first one is canceled as confirmed by designer there https://hallofheroeslcg.com/official-ffg-rulings/ — Baker · 1 4/30/20
What's the expected reaction with Klaw's "Solid-Sound Body"? — alexsuch · 20 6/17/20
With Steady now a thing this card gains added value for dealing with double-stacked Tough bosses, 'cause now you can use the third, hardest hitting attack after you clear the other two. Not intentional design (since Steady came later), but it works. — KLSanchez · 9 8/19/22